There is a different type of tests conducted for an oil well. Each test type listed, including information on the condition at the time of testing, the type of hardware required, the typical test duration and test radius of the investigation, and objectives that may be addressed.

A closed chamber test is a specialized form of a drill stem test, that can be conducted under open-hole conditions or after casing and perforating. 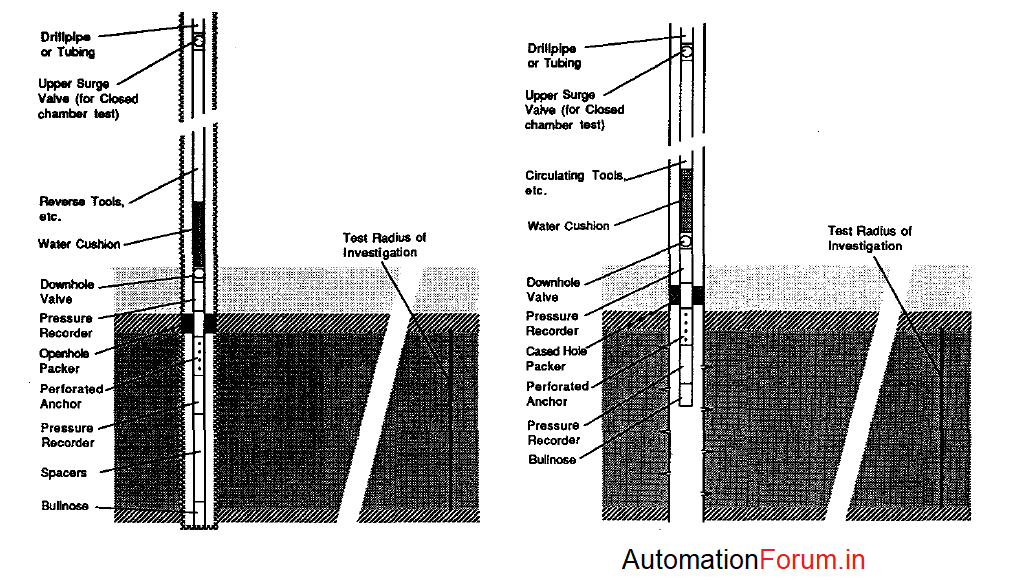 When pressure is recorded both at the sandface and inside the chamber while formation fluids flow into the closed chamber, it is possible to estimate production versus time during drawdown.

The closed chamber test equipment may be lowered in a cased hole along with perforating guns. The formation interval is perforated under mud hydrostatic pressure. When the test valve is opened, the formation is subjected to the pressure in the drillstem, which can be increased by partially filling the chamber with a water cushion Because the pressure in the drillstem is much less than in the formation, this results in a flow surge that helps to clean the perforations.

The closed chamber test is programmed as a typical drillstem test sequence lasting 4 to 5 hr. The chamber pressure can be lowered before the second flow by opening the upper chamber valve. Test radius of investigation and objectives are the same as for any short-term drillstem test equipped with mechanical gauges.

The constant-pressure test (Jacob and Lohman, 1952) is distinguished from standard flow tests because the test is initiated with a step change in pressure from one constantpressure value to another instead of the conventional step change in flow rate.

For wildcat and exploration wells drilled to find or delineate newly found reservoirs, the first testing objective is to determine the well flow potential. temporary production facility is required for this kind of testing, along with special safety measures and a means for the disposal of fluids produced.

The main safety concern is well control, because in exploration the flow behavior and composition of the reservoir fluids is largely unknown. Since wells drilled for field development usually exhibit similar flow behavior as in neighboring wells, well control can focus on known problems. In exploration wells, preventive measures must be prepared for a wide range of potential problems.

In exploration wells, preventive measures must be prepared for a wide range of potential problems. Special precautions are taken to see that sand production, corrosion-causing compounds in the hydrocarbons, or other unexpected events will not create blowout conditions during the well test.

If a transient test is performed, the objectives of the test usually focus more on reservoir characterization than on completion evaluation.

The wireline formation test is usually performed only in a mud-filled open hole. Hydraulically operated arms press against one side of the borehole, forcing the testing device against the opposing side.

A doughnut-shaped rubber packer provides a seal, inside which a probe is forced into the formation. When exposed to low pressure, reservoir fluids flow into the tool.

When a valve is shut, flow stops and a buildup occurs. Because the flow is for only a few seconds or minutes, the pressure builds up to the reservoir pressure in a short period of time. The test radius of investigation is at most only a few feet, but unlike most well tests, the perturbation is spherical, not radial. 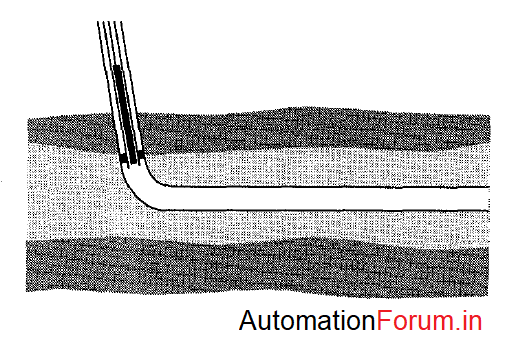 Test conducted on borehole wall; formation fluid sampling. since transient test measurements are acquired in most wells just above the productive interval, and in addition, because the test string is frequently too rigid and too long to pass through a curved wellbore, the measurements are usually conducted above the horizontal wellbore.

First, tests in the pilot hole drilled before kicking off to drill the horizontal borehole segment can yield horizontal and vertical permeability. Second, a good directional drilling survey can frequently provide an adequate estimate of the standoff. Third, a production log flow survey conducted with coiled tubing can determine what portion of the wellbore length is actually producing, thus indicating the effective production length.

Fourth, as mentioned above, wells in developed reservoirs should be flowed for a sufficient length of time to equilibrate pressures along the wellbore. For wells that flow at sufficiently high rates, continuous borehole pressure and flow rate measurements. 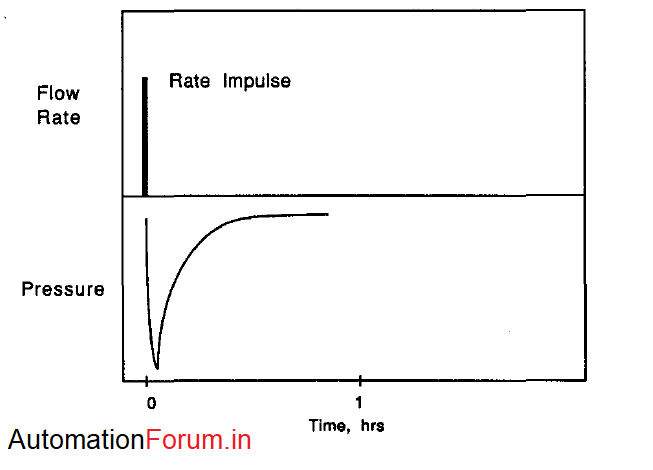 There are two common types of impulse tests. Below the first figure shows a way to achieve the “true” impulse test configuration by running the test equipment together with the drilling guns transported by pipeline. With sufficient low balance, the perforations begin to flow once the interval is triggered, which is an effective means of cleaning drilling. 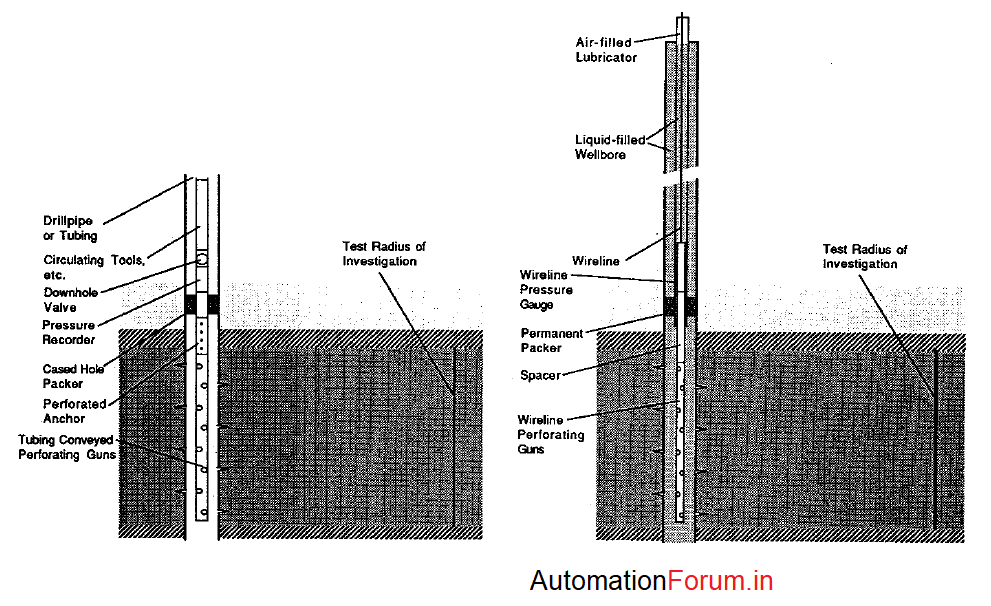 The other test configuration is not a true impulse test because the flow never really closes. As in the test, it is done while drilling under balance. A small air bag in the lubricator used to lower the wire tool is compressed when the fluids flow into the well immediately after drilling.

Once the volume of air has been compressed to the maximum, the well stops flowing without closing a downhole valve. For gas wells, the well filled with liquid minimizes the effects of storage of the well, so the radial flow that would require 12 hours or more to overcome in a conventional accumulation test appears in a few minutes.

In a multirate test, pressure measurements are acquired while flowing at a succession of surface rates. In general, the flow and pressure stabilize at each speed before moving to the next speed. If the only data acquired are in stabilized conditions, the multirate test is equivalent to a stabilized flow test.