Conductimetric gas sensors measure the concentration of an element in the gas, based on the principle of measuring a change in the electrical resistance of a material upon the introduction of the target gas.

For sensing the gas semiconducting metal oxides are used in the sensors. 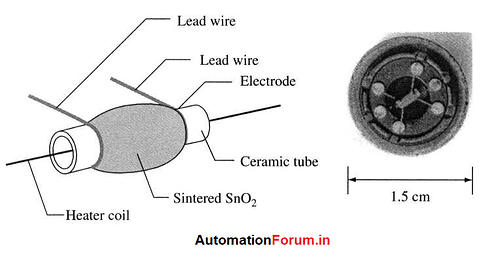 The device consists of a platinum heating coil wound with wire inside a ceramic former on which a thick layer of porous tin oxide is manually painted. The film is then sintered at a high temperature so that the appropriate nanocrystalline structure is formed. The electrical resistance of the sintered film is then measured by a pair of gold electrodes and a basic potential splitter circuit.

Tin oxide devices are operated at various high temperatures and are doped with different materials to improve their specificity. The response of a tin oxide sensor, in terms of its relative conductance Gs / G0, where Gs is the conductance of a gas of fixed concentration and G0 is the conductance in air.

The devices are operated at high temperatures (typically between 300 and 400 °C) for several reasons:

In a simple physical description, the tin oxide behaves like an n-type semiconductor and, therefore, there is an increase in the electron carrier density n, and hence in the electrical conductivity cr, of the material with increased gas concentration where

where Un is the electron mobility.

There are two basic configurations of a microhotplate; a solid diaphragm (1st pic) and a suspended bridge (2nd pic) that contains a meandering resistive heater