The RF MEMS switch, in essence, is a miniaturized version of the venerable toggle switch. MEMS switches can be a thin metal cantilever, an air bridge or a diaphragm; From the point of view of the configuration of the RF circuit, it can be connected in series or in parallel with an RF transmission line.

The basic structure of a switch in the MEMS series of contacts consists of a conductor beam suspended during an interruption in the transmission line. The application of DC polarization induces an electrostatic force in the beam, which lowers the beam through space, short-circuiting the open ends of the transmission line. 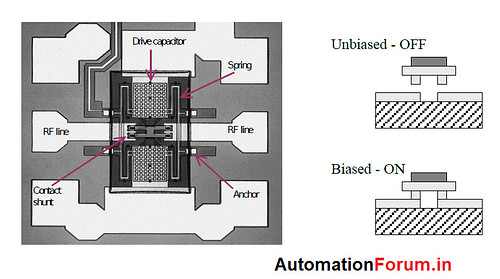 When the DC polarization is removed, the restoring force of the mechanical spring in the beam returns it to its suspended position (upwards). The losses in the closed circuit are low (dielectric and I2R losses in the transmission line and DC contacts) and the open circuit isolation of the gap of ~ 100 μm is very high up to 40 GHz. Because it is a contact switch Direct, it can be used in low-frequency applications without compromising performance. 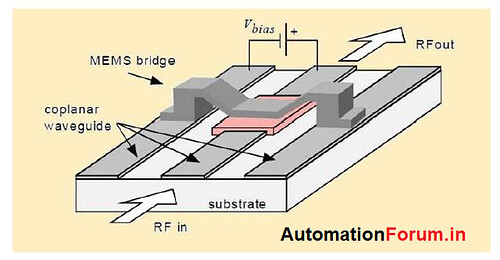 In this case, the RF signal is shorted to ground by a variable capacitor. Specifically, for RF MEMS capacitive shunt switches, a grounded beam is suspended over a dielectric pad on the transmission line.

There is a thin layer of dielectric which separates two conducting electrodes. There is no direct metal to metal contact. The capacitive switch is mainly used in a shunt switch configuration where RF signal is shorted to ground by a variable capacitor. 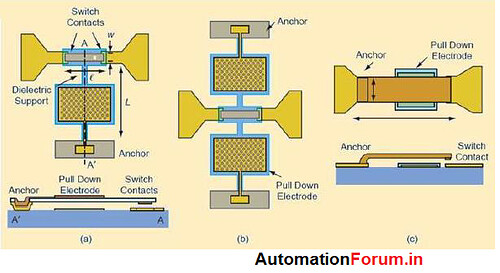 The basic structure has a reactive ohmic beam suspended during an interruption in the transmission line. The ohmic switch can be of two types, side and line. The signal range for the ohmic switches is DC at 40 GHz, with the upper limit established by the parasitic capacitance that is formed between the metallic contacts.