Measuring instruments are devices that measure physical quantities that are obtained real time and compared with standard quantities with predefined units that yields a numerical value relating the subject under study and the referenced quantity. Most measurement instruments are subject to errors.

Stages of a general measurement system

PSE : This stage is in direct contact with thequantity under measurement and consists of various sensing elements.

DCE : this stage converts data from one from to another. Eg: Voltage to frequency, V to I conversions. etc

DME : This tage converts the level of the signal, that is amplification or attenuation of signal

DPE : This stage is the display, recorders or storage elements.

Instrument : A device that gives the value of a quantity. Accuracy : The lowest possible difference in value that the instrument achieves (measured value) in comparison to the true value. Precision : Gives the reproducibility of the measurement system. While an instrument has high precision does not mean that it is accurate. Resolution : The smallest change in the input (measured value) that the instrument reacts to. Sensitivity: Ratio of the change in output to the change in the input. Reproducibility : Measure of repeatability of reading over a period of time. this is different from precision, where precision is defined by the repeatability of the same value for the foxed value of variable during successive measurements, Reproducibility is more related to the aging effects of the system. Repeatability : Repeatation of a reading of an instrument from a given set of readings. Error : Deviation of the measured value from the true value.

Gross Error : Human errors due to misreading of instrument, incorrect adjustment, improper application and computational error. Systematic Error : Caused due to defective or worn parts of the instrument and also effects of environment on the instrument. Random Error: Errors whose cause cannot be determined due to random variation in parameters or system.

For meaningful results in calibration, the measured variables have to be accurate which is quantified by standards

Standards for Resistance Manganin is used as the standard resistance 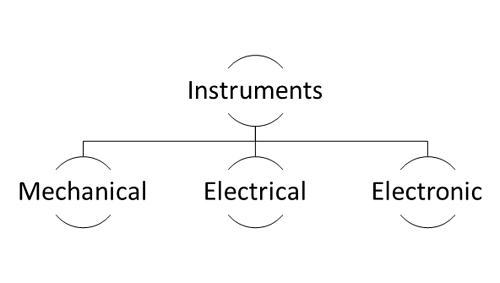 Mechanical : Having stable static conditions, they do not read dynamic (transient) conditions of the measuring variable. Electrical: More rapid indication. Involves conversion of electrical quantity to mechanical movement on the scale Electronic: Having the fastest response to follow both static and dynamic changes in the system

Classification based on output 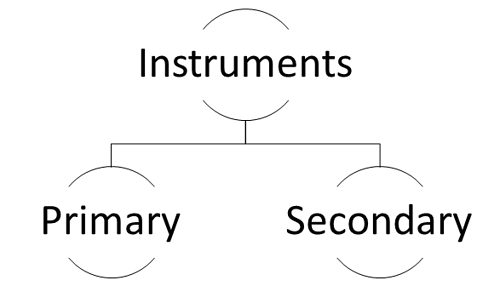 Primary : These absolute measuring systems gives the magnitude and value of the variable in terms of the physical quantities of the instrument which need not be compared to any standard values. They are used in national laboratories for standard measurement Eg: Tangent galvanometer, Raleigh current balance

It is time consuming, every time a reading is made, it is computed for obtaining the quantity under measurement.

1. Based on the electric parameter it depends on Depending on the underlying principle of operation, the secondary instruments are classified as below. The definitions are self explanatory. 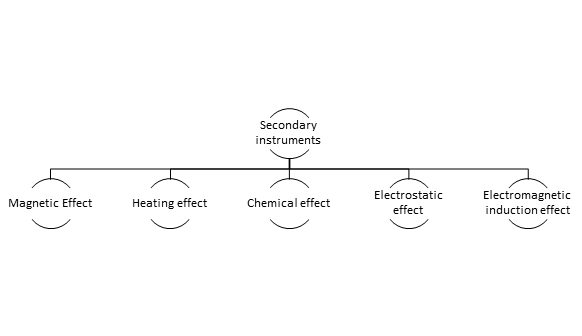 2. Based on the operation nature 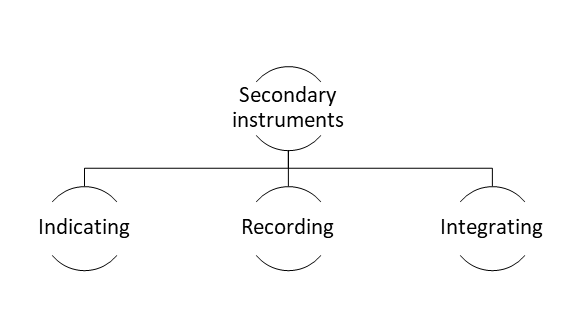 Indicating : Indicate the quantity to be measured by means of a pointer which moves on a scale. Examples are ammeter, voltmeter, wattmeter etc

Recording : Indicating instruments that continuously records the values of the measured variable on a chart or dial. The recording is generally made by a pen on a graph paper which is rotated on a dice or drum at a uniform speed. The amount of the quantity at any instant may be read from the traced chart.

Integrating: Records the total quantity of the measured variable over a period of time. Eg: kilowatthour (kWh) meter