Electric grounding conducting connection between an electric circuit and the earth.Grounding loop provides an easy path for excess current and overload to earth, saving from instrument damage. Signal ground is referred to, point and return path for all signal currents.

Normal input means, it consists of single line for signal flow and a return line. A commonly used instrument is the measuring-type instrument, such as a voltmeter, oscilloscope, or chart recorder. These instruments take some input quantity and display it to the operator. In general, this type of instrument has a complete ground system, as shown: 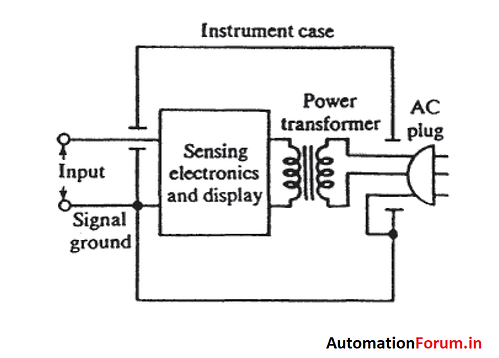 It should be noted that the input of these instruments is referenced to case ground, and as stated in the preceding section, this case ground is also tied to earth ground through the third wire of the ac power line. As long as the third wire is plugged in, the input ground should not be connected to any point that has a potential with respect to earth ground, or it could produce disastrous consequences.

Some measuring instruments have a differential (floating) input. For example, if a 5-V signal were applied to the positive input with respect to case ground and a 3-V signal on the negative input, the only portion that would be sensed is the difference voltage (differential voltage) of 2 V. The part of the voltage that is common to both inputs is termed “common-mode voltage” and is ideally not sensed.which means the signal that is displayed is the voltage difference between the two input signals so that the return signal also should be isolated from the case. As shown: 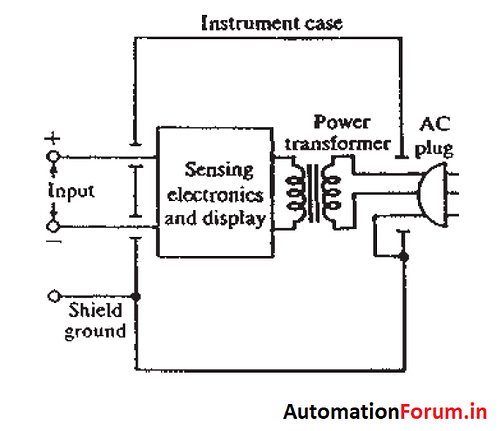 Since both input terminals are isolated, either terminal can be considered as signal ground. This reference terminal can be at an arbitrary voltage with respect to case ground as long as instrument voltage ratings are not exceeded.

An output-type instrument is the signal source, such as a power supply or signal generator, which is to be connected to another instrument.

For dc or low-frequency outputs, there are usually plus and minus output terminals with a separate case terminal that can be connected where desired, as shown: 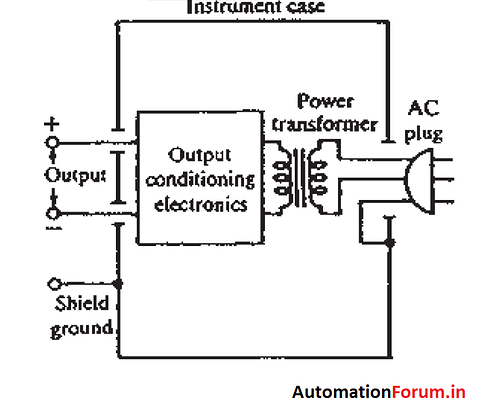 For rf generation or where there are high-frequency components, the output will be on an rf connector, where the outside or ground side of the connector is connected to the case, as shown: 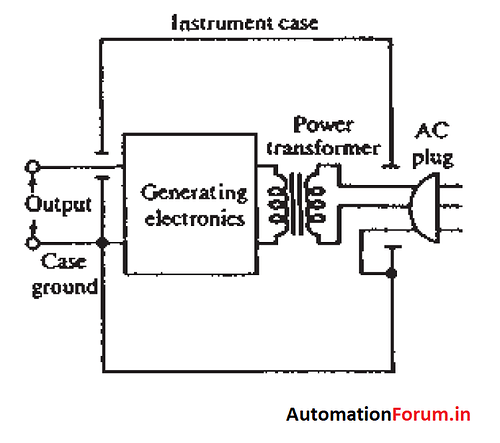 An absolute general method of properly connecting the grounds of instruments together does not exist. Depending on the circumstances, there may be a number of ways that will produce satisfactory results. General guidelines for ground interconnections are:

All instruments should be connected to earth ground for safety purposes, and this requirement is often in conflict with the rule regarding multiple ground paths. In actual practice, the foregoing “rules” are used as a guide, and all grounding is done in such a manner as to minimize the effects of compromising these rules. For example: 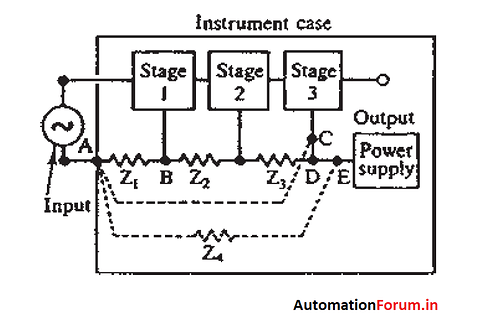