MCB (Miniature Circuit Breaker) is a circuit breaker with optimum protection facilities of overcurrent and short circuit only. Its basic function is to detect the fault condition and interrupt the current flow. it avoids overheating in case of excess current & provides fire protection.

The MCBs are delay trip devices, to which the magnitude of the overcurrent controls the operation time. This means that they are operated whenever there is sufficient overload to create a danger to the circuit that is being protected.

An MCB is a mechanical switching device which is capable of making, carrying and breaking current under normal circuit current and also automatically breaking under abnormal conditions.

Why use an MCB?

To secure your household appliances to heavy electrical machines from short circuit and overload current MCBs are used. Unlike a fuse, which operates once and should be replaced, a circuit breaker can be reset to normal operations. 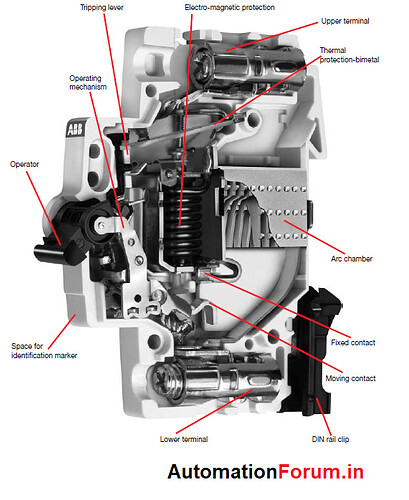 There are two contacts one fixed and the other mobile. When the current exceeds the predefined limit, a solenoid forces the moving contact to open and the MCB shuts off, thus stopping the current flowing in the circuit. To restart the current flow, the MCB is turned on manually. This mechanism is used to protect from faults that arise due to overcurrent or overload.

There are three types:

Every MCB have a specified tripping curve, B, C, D or sometimes very specialized curve that varies from MCB brand to brand. B, C & D curves are defined in IEEE regulations.

This type of MCB will trigger instantly at a rate of three to five times its rated current. These are normally used for resistive or small inductive loads where the switching overvoltages are very small.

This type of MCB will trigger instantly at a rate of five to ten times its rated current. These are normally used for high inductive loads where switching overvoltages are high, such as small motors and fluorescent lighting. In such cases, C-type MCBs are preferred to handle the highest value of the short-circuit currents.

This type of MCB will fire instantly at a rate of ten to twenty-five times its rated current. These are normally used for very high inductive loads where the high input current is very frequent. These are suitable for specific industrial and commercial applications.

Advantages of MCBs over Fuse:

Only disadvantage over fuse is, this device is costlier.