##What is Master Control Relay (MCR)?

In an electrical circuit, Master control relays are used to shut down a section of an electrical system. In ladder logic, MCR is used to turn ON one section of a programming line. An MCR option should be opened and closed properly. 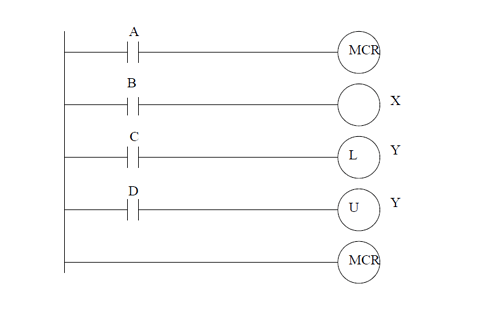 There is a section of ladder logic implemented between the MCR instruction lines. All the instructions in the line are executed only if the MCR line is turned ON. When the first MCR coil in inactive, the ladder logic is still examined, but all of the outputs are forced off.

For example, consider the above ladder logic program if the MCR is turned ON by A then the output X, Y is updated by the switches B, C, D respectively. D turn OFF the Y.

If the MCR is turned ON all the lines are executed and return the main program after the second MCR. But, if A becomes false X will be forced off, and Y will be left in its last state. The MCR section will not be updated but will be executed so that there won’t be any increase in execution time.