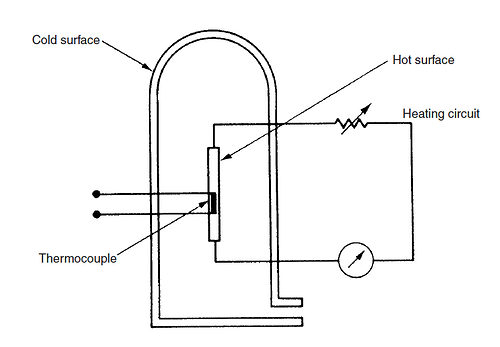 Operation of the gauge depends on the thermal conduction of heat between a thin hot metal strip in the centre and the cold outer surface of a glass tube. The metal strip is heated by passing a current through it and its temperature is measured by a thermocouple. The temperature measured depends on the thermal conductivity of the gas in the tube and hence on its pressure.

Thermocouple gauges are typically used to measure pressures in the range 104 mbar up to 1mbar.

Pirani gauge is similar to a thermocouple gauge but has a heated element that consists of four coiled tungsten wires connected in parallel. 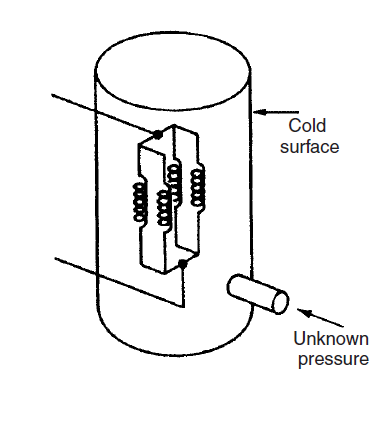 Two identical tubes are normally used, connected in a bridge circuit with one containing the gas at a unknown pressure and the other evacuated to a very low pressure. Current is passed through the tungsten element, which attains a certain temperature according to the thermal conductivity of the gas. The resistance of the element changes with temperature and causes an imbalance of the measurement bridge. The imbalance is proportional to the pressure change. Such gauges cover the pressure range 10^-5 mbar to 1mbar. 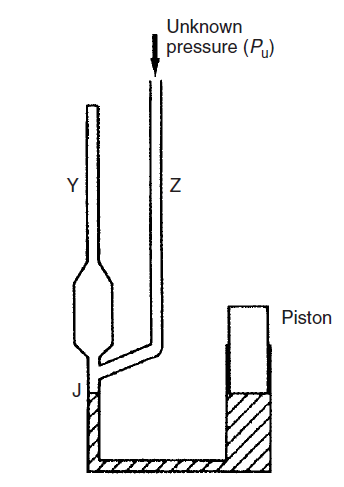 The gauge can be visualized as a U-tube manometer. To operate the gauge, the piston is first withdrawn. This causes the level of mercury in the lower part of the gauge to fall below the level of the junction J between the two tubes marked Y and Z in the gauge. Fluid at unknown pressure Pu is then introduced via the tube marked Z, from where it also flows into the tube of cross-sectional area A marked Y. Next, the piston is pushed in, moving the mercury level up to block the junction J. At the stage where J is just blocked, the fluid in tube Y is at pressure Pu and is contained in a known volume Vu. Further movement of the piston compresses the fluid in tube Y and this process continues until the mercury level in tube Z reaches a zero mark.

The thermistor gauge operates on identical principles to the Pirani gauge but uses semiconductor materials for the heated elements instead of metals. The normal pressure range covered is 104 mbar to 1mbar. 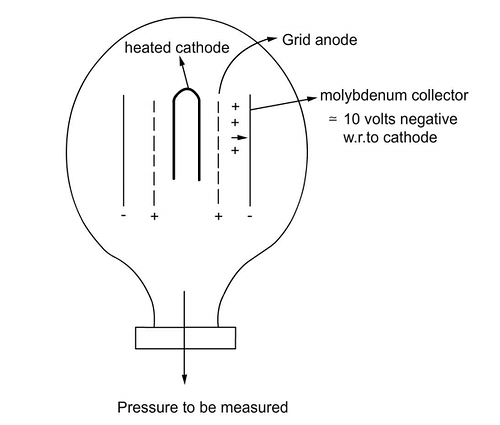 The ionization gauge is a special type of instrument used for measuring very low pressures in the range 10^-13 to 10^-3 bar. Gas of unknown pressure is introduced into a glass vessel containing free electrons discharged from a heated filament, as shown in. Gas pressure is determined by measuring the current flowing between an anode and cathode within the vessel. This current is proportional to the number of ions per unit volume, which in turn is proportional to the gas pressure. Ionization gauges are normally only used in laboratory conditions