Shift registers are oriented to single data bits. A shift register can only hold so many bits, so when a new bit is put in, one must be removed. An example for shift register is shown below: 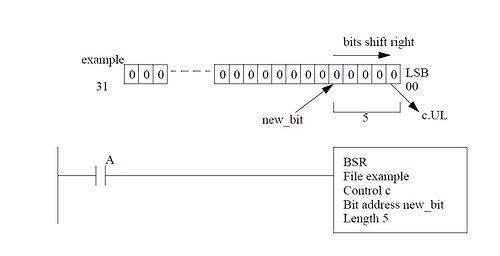 The shift register is the word ’example’, and it is 5 bits long. When A becomes true the bits all shift right to the least significant bit. When they shift a new bit is needed, and it is taken from new_bit. The bit that is shifted out, on the right hand side, is moved to the control word UL (unload) bit c.UL.

This function will not complete in a single ladder logic scan, so the control word c is used. The function is edge triggered, so A would have to turn on 5 more times before the bit just loaded from new_bit would emerge to the unload bit. When A has a positive edge the 5 bits in example will be shifted in memory.

Stacks store integer words in a two ended buffer. There are two basic types of stacks; first-on-first-out (FIFO) and last-in-first-out (LIFO). As words are pushed on the stack it gets larger, when words are pulled off it gets smaller. When you retrieve a word from a LIFO stack you get the word that is the entry end of the stack. But, when you get a word from a FIFO stack you get the word from the exit end of the stack (it has also been there the longest). 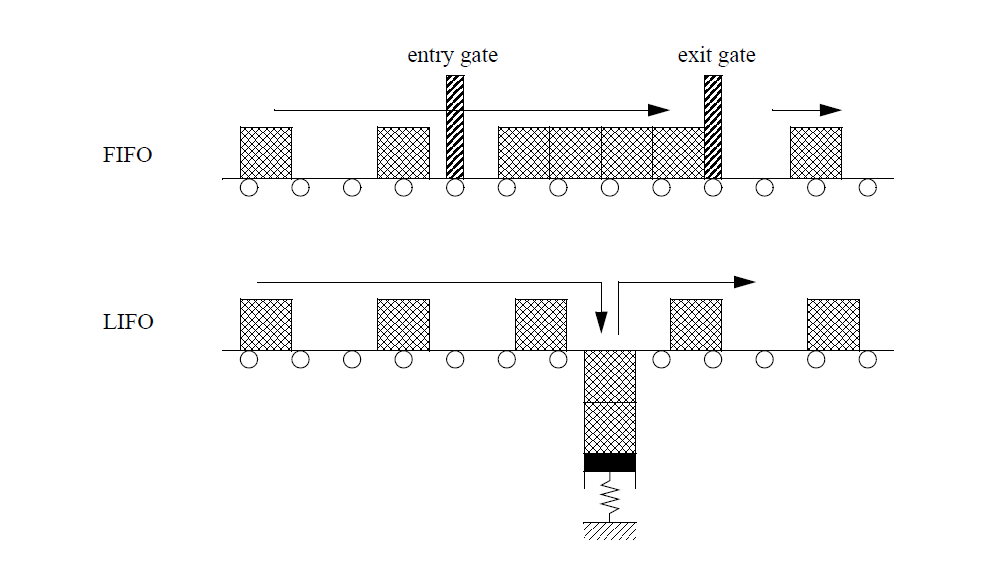 The ladder logic functions are FFL to load the stack, and FFU to unload it. The first time this FFL is activated (edge triggered) it will grab the word (16 bits) from the input card word_in and store them on the stack, at stack[0]. The next value would be stored at stack[1], and so on until the stack length is reached at stack[4].

When the FFU is activated the word at stack[0] will be moved to the output card word_out. The values on the stack will be shifted up so that the value previously in stack[1] moves to stack[0], stack[2] moves to stack[1], etc. If the stack is full or empty, an a load or unload occurs the error bit will be set c.ER. 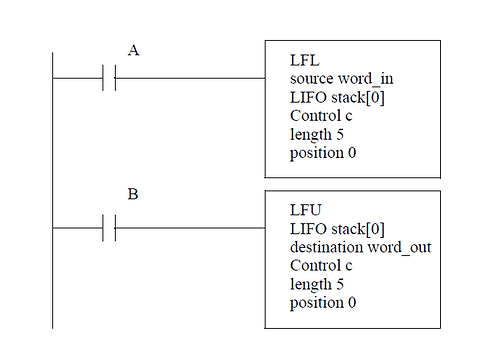 The LIFO stack commands are shown in above. As values are loaded on the stack the will be added sequentially stack[0], stack[1], stack[2], stack[3] then stack[4]. When values are unloaded they will be taken from the last loaded position, so if the stack is full the value of stack[4] will be removed first.

A PLC sequencer uses a list of words in memory. It recalls the words one at a time and moves the words to another memory location or to outputs. When the end of the list is reached the sequencer will return to the first word and the process begins again.