It is a general-purpose programming language, such as Language C or Basic, but with the characteristic that is totally graphic, thus facilitating the understanding and use of this language for the SCADA designer and programmer of applications.

It includes libraries for the acquisition, analysis, presentation and storage of data, GPIB and serial ports. In addition to other features, such as connectivity with other programs, for example, calculation, and especially MatLAB.

The Front panel and the Block diagram:

It could be said that in any VI there are two well-differentiated faces: The Front Panel and the Block Diagram. 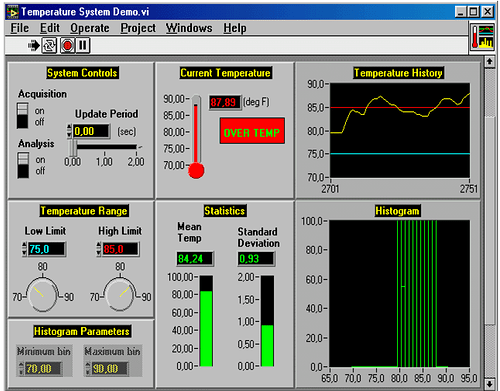 The VI Block Diagram would be the hidden face of the Front Panel, a face that the system user can not see. In it are all the interconnected controls and indicators, much like an electrical diagram. This face is much less conceptual than the Front Panel and for the user, it would be very difficult to understand it. The following Figure below is the block diagram: 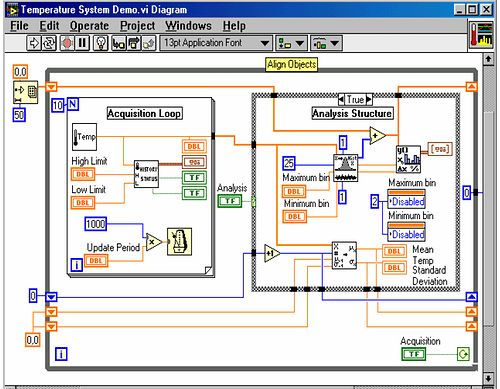 We can see how all the modules are interconnected, through connection lines, where the different data or values ​​of the VI circulate. This way, the VI works as a set of elements, modules and sub-modules.

A control can take many forms, and many of these forms the actual drawing used in real instruments. Others are strictly digital or analog concepts. But all the controls have a visual form that indicates to the user what the status of said control is in the real instrument. It is very important in a SCADA system that the user does not have to interpret anything, but everything is clear and concise, the interpretations can give rise to false actions and, consequently, there could be regrettable mistakes. In addition, two users could interpret any event differently.