It is just a connection of many devices that are working independent of each other over a common platform sensing different data and the communicating within themselves. Derived from the idea of Internet and world wide web which is actually data collected and shared by people.

Similar to this, if things collect, process and share data it becomes the internet of things. This term though recently coined is a phenomenon that was introduced around 2008 as SMART PLANET. Having started first when the number of things or devices on the internet increased than the number of people Which is not far fetched considering the number of smart devices that an average person uses (which is 1.5 on an average). Our phone alone has many sensing elements with a communication on the wireless with a limited band gap.

IoT is an big business internationally, with recent billions of dollar acquisition of small scale companies by the fortune 100 companies. Eg: Google acquisition of the company that specializes in the manufacture of the temperature sensor and smoke detectors. With a target on home automation and wellness industries the IoT proposes early warning systems, control, Convenience improving the human quality of life as a whole.

IoT gives an insight to a number of process, it includes engineering, business and scientific data analytics

With intuitive sensing, fast connection and data analysis and processing there are many uses to the IoT in home automation and also in wellness b extension. Having data transmitted to the hospitals or self-care services without the need to physically involved in these process which typically is offline now a days, The quality of life improves drastically with constant monitoring.

In industries especially the various devices, sensors and measurement systems are already connected to a wide network with a control from the programmable automation controller. Sometimes there are systems that connect automobiles and other complex systems to a common platform as seen in the Tesla Cars.

IoT can be classified depending on the complexity of the data that is being processed, memory and power of the individual devices and the communication system used for the device integration. 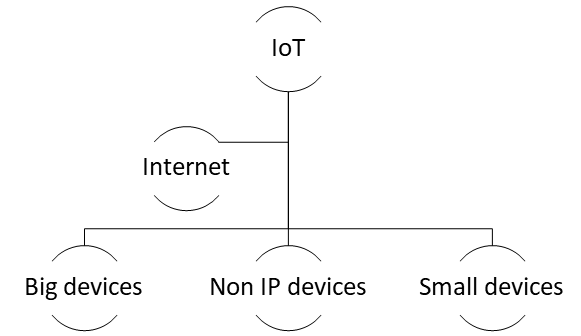 They are large complex devices

Always powers and connected to devise

Power is limited by the battery

For internet connection, a gate way is to be used to connect it online.

Most IoT data flow consists of four basic stages. Where as the stage increases the data analytics or processing increases to give a dept of information to the end user. While most data would not need to go through all the four stages to be analysed. For data sharing and integration data flow is expected to being all the four stages. 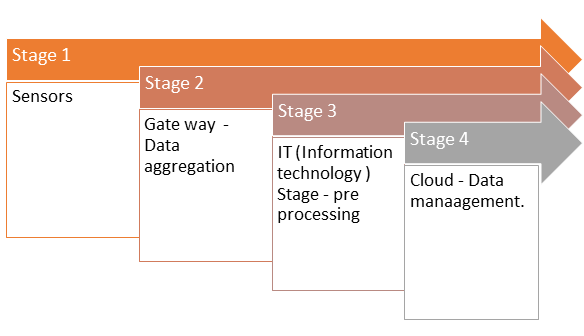 Stage 1 • This includes Sensors ( Macro or micro ) depending on the application which collects real time data from the environment. This is the initial step in the IoT process. • Very rudimentary step. • No Memory element.

Stage 2 • Gate way for the stage 1. Where the data collected is analysed and processed for further steps. • Data compilation and simple processing devices. • Small controllers fit this description. • Limited memory and processing capabilities

Stage 3 • This is the IT (Information technology) Stage • Information processing using larger servers or control rooms are very good examples of the system • Large memory and better processing capabilities. This is where the major processing of data and control of multiple devices take place. Stage 4 • Cloud storage of the data accumulated. Dynamic system which has very fast processing speed and involved in data management. • This is the stage where the big data analytics is used to decide on the plethora of information to gather intel to use as and when needed.

The final stage is where the insight on the data collected can be utilized Eg: for a survey . But it takes time to complete the stages in that order which is why for local control application, stage 2 or stage 3 can be used. Eg: to control the on and off of a device, data from stage 2 is sufficient. But to control the operations in a large plant, needs sophisticated data analysis which is done using DCS or SCADA systems.

1 Like
Fault prediction system based on internet of things