The basic transduction mechanism in these gages is the generation of positive ions from the gas molecules that are present in the chambers to be evacuated. The ions are generated as a result of collisions between the gas molecules and the high-energy electrons that are generated specifically for that purpose. The resulting ion current is proportional to the gas pressure in the chamber.

The triode or thermionic emission ionization transducer is a hot-cathode vacuum gage. 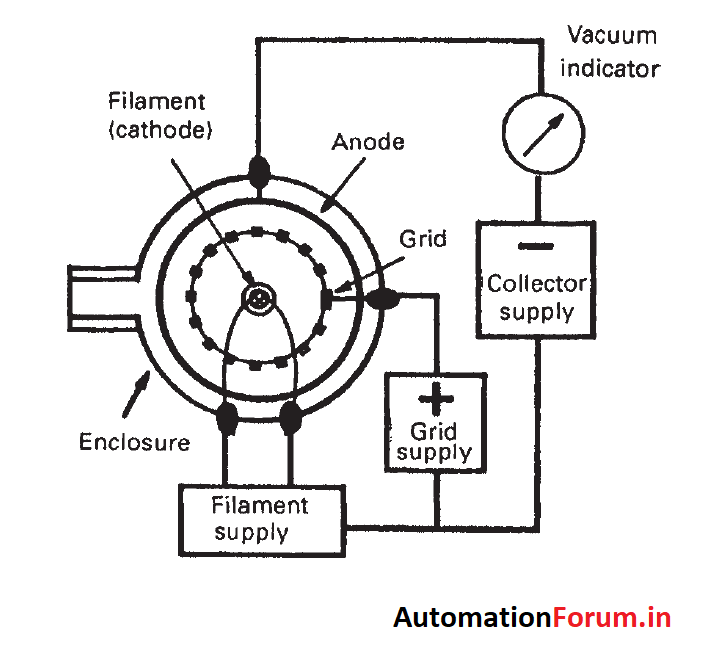 It consists of a tungsten filament and cathode in the center. Concentric with the cathode is the grid, which is made from a fine nickel wire helix, held in position by upright supports. Surrounding the grid is the external nickel plate electrode, which is concentric with the grid. The gage is housed in an enclosure with an opening that is connected to the chamber whose pressure is being measured.

The electrons are accelerated from the cathode to the grid (+180 V), but most electrons not collected by the fine helix move toward the plate (-20 V). As they move in the vicinity of the plate, the electrons get repelled by the negative potential of the plate. These electrons undergo several oscillations between the grid and the plate, and during this process they collide with the gas molecules, creating positive ions. The ions are attracted toward the negatively biased plate collector, and an ion current flows in the plate circuit. This ion current, within a certain pressure range, is proportional to the total pressure (vacuum) in the chamber.

In this gage, the electrons are generated by a large electric field instead of a hot cathode. The gage consists of two plate cathodes made from zirconium or thorium. In the space between these cathodes is placed a ring-shaped anode. A magnet provides a magnetic field normal to the plane of the cathode plates, as shown: 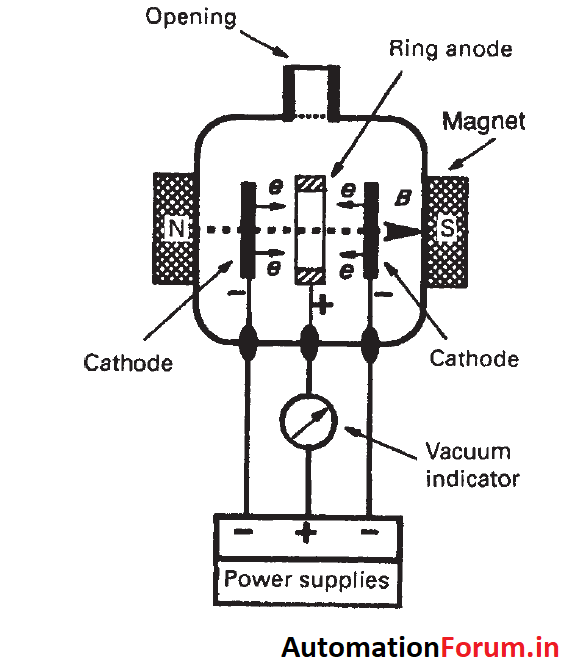 It is also known as the Penning or Philips gage. A high voltage is applied between the anode and the cathodes, producing electrons that leave the cold cathode surface. These electrons, in the presence of the magnetic field B, travel in spiral paths toward the positively biased ring anode. Only a few electrons are captured by the anode, but the rest make several passes through the ring anode, and in the process ionize the gas. The positive ions collected by the negatively biased cathodes produce the usual ion current proportional to the gas pressure.