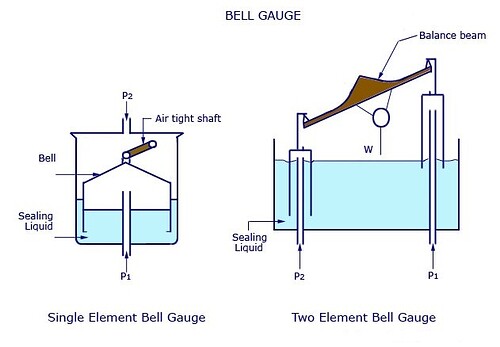 The single bell model consists of an inverted bell suspended in such a way that it is immersed in oil, and arranged so that the measured pressure raises the bell and moves a balance beam which has a counterweight on the opposite end. Movement of the balance beam is transmitted through a mechanical linkage to a pressure indicating assembly.

When pressure p1 and p2 are applied to the system bell start rise upward and balance at a point. As the bell rises, there is a less of it immersed in sealing liquid so that the upthrust on it due to buoyancy is reduced.

A wider field of application is found for the double bell model which incorporates two inverted bells, partly immersed in oil which acts as a liquid seal, supported from the opposite ends of a balance beam and arranged so that a pressure can be introduced under each bell. In effect, this arrangement weighs the most minute difference in pressure between the two pressure lines. As a result, the instrument is particularly adaptable to the measurement and control of furnace and heater draft conditions, particularly where atmospheric pressure compensation is necessary.