Optoisolator or better known as an optocoupler is an electric photo switch consisting of a LED emitting infrared light and a phototransistor as shown below:

For this component, there is one parameter that needs to be considered besides the individual for the LED and phototransistor as described before which is a combination of led and phototransistor namely current transfer ratio (CTR) which is a ratio of the collector current and diode current to a certain condition. Where CTR can be used to find the number of holes in a field to press as small as possible a calculation error. 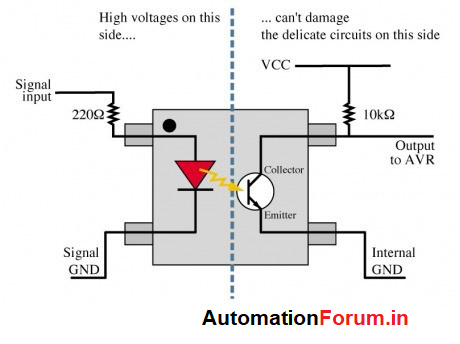 Usually in the market optocoupler available with type 4N25 / 4N35 has an isolation voltage of 7500 volts with the maximum ability of the LED to be fed by a forward current of 3A.

The physical optocoupler can be of various forms. If only used to isolate the voltage level or data on the transmitter side and receiver side, then this optocoupler is usually made in solid form (there is no space between the LED and phototransistor). So that the electrical signal at the input and output will be isolated. In other words, this optocoupler is used as an IC optoisolator.