Any quantity which can be measured is known as physical quantity.

A physical quantity which is being measured.

A device which provides a usable output in response to a specified measurend.

A passive instrument can convert physical or chemical properties into another property without the aid of an auxiliary source.

A primary instrument is a scientific instrument,which by its physical characteristics is accurate and is not calibrated against anything else.

Secondary instruments must be calibrated against a primary standard.

What is the difference between measured value and true value?

Measured Value - Any value or any reading calculated from measurement system or measuring instrument is known as measured value.

True value - Any value calculated from rated values is known as true value.

What is a Primary element ?

Primary element is the measuring element that quantitatively converts the measured variable energy into a form suitable for measurement.

What is a transmitter ?

What is meant by controlled variable?

What is a controller?

A controller is a device which operates automatically to regulate a controlled variable.

What is Controller algorithm?

Controller algorithm is a mathematical representation of the control action to be performed.

What is set point?

Set point is an input variable which sets the desired value of the controlled variable. 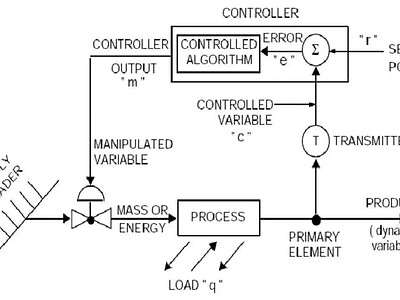 what is error in a closed loop ?

The algebraic difference between the real value and ideal value of the measured signal.

What is manipulated variable?

A quantity or condition which is varied as a function of the algebraic error signal so as to cause a change to the value of the directly controlled variable.

What is feedback control?

Control action in which a measured variable is compared to its desired value to produce an actuating error signal which is acted upon in such a way as to reduce the magnitude of the error.

Control in which the output of one controller is introduced as the set point for another controller.