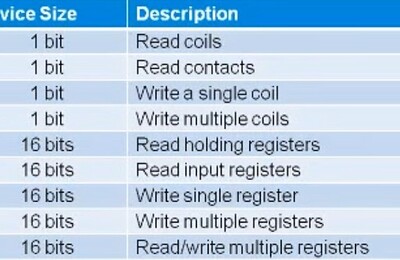 Differential signalling allows distance of upto 4000 ft. Up to 32 devices with standard RS 485-Line drivers Only 1 device may talk at a time Require termination resistors at each end of bus

That’s a good summary of the Modbus protocol, with one exception, Modbus ASCII is not really a human readable format.

First, the Modbus ASCII data is normally SCADA data: process values, not text Second, the data values always need to be decoded from binary transmission mode at application level. The decoding displays the original value, but that happens with RTU or TCP as well. No one reads raw binary.

The hex value for the ASCII character for each hexadecimal number representing the data value is used in the Modbus message.

How convoluted is that?

Furthermore, ASCII does not have the strict timing requirements of of RTU, which made ASCII useable over telephony modems.

The use of ASCII doubles the number bits for the data, compared to RTU. With the decline in use of telephony, the use of Modbus ASCII has declined because RTU is more efficient over local RS-485 networks or when it is packed as RTU over Ethernet.