HOW WOUND ROTOR MOTOR DIFFER FROM OTHER MOTORS

Wound rotor motor is an induction motor which was developed for variable speed applications it is also called a slip ring AC motor. This 3-phase induction motor has high starting torque and because of this torque it can be used for many applications such as it can be used for high inertia loads having a long acceleration time. It is because we can control the speed, torque and resulting heating of the wound rotor motor

The slots of the stator are placed with windings the windings can be wound in either a wye or a delta configuration. It can be wound to run on a single voltage or dual voltage

The slip ring in the wound motor is mounted on the shaft, slip rings are electrically insulated from the shaft brushes are used to connect the rotor to the external set of resistors and the graphite in the brush provides lubrication 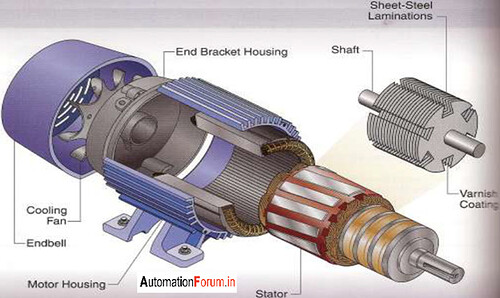 Brushes will connect the rotor to the external resistors, external resistors carry the entire rotor current and thus it will be helpful for the troubleshooting by the help of an ammeter the current can be easily measured any differences in current in the different phases show the problem in the resistor bank

What is an electric motor and how does it work? Types of electric motor
How Electric power Steering can be useful to reduce the fuel consumption and pollution? what are the advantages of EPS over conventional steering