How to measure pressure using a McLeod gauge?

McLeod gauge is a commonly used device for low-pressure measurements. It is essentially a manometer which uses mercury as the manometric fluid. It can be used for measuring pressures up to 0.1 torr. It was invented by Herbert McLeod in 1874. 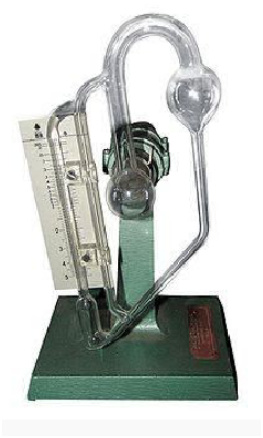 The process of measurement 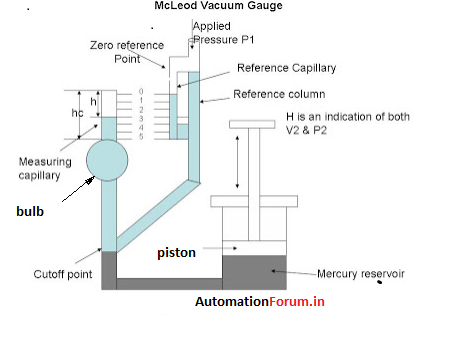 The basic form of a McLeod gauge is shown above. It operates by taking a sample of gas in a vacuum chamber and then compressing it with mercury.

Initially, the pressure to be measured is applied to the reference column. Then piston is withdrawn from the mercury reservoir, lowering the level of mercury below the cutoff point, thereby admitting the gas of unknown pressure P1. Let the volume of gas in the measuring capillary and the bulb be V1.

How to calculate the unknown pressure?

The unknown pressure is determined by using Boyle’s Law.

Boyle’s Law states that the absolute pressure exerted by a given mass of an ideal gas is inversely proportional to the volume it occupies if the temperature and amount of gas remain unchanged within a closed system.

Mathematically, Boyle’s law can be stated as Pressure is inversely proportional to the volume.

P2 is the final pressure

So according to Boyle’s law,

• Independent of the combination of gas • It serves as a reference standard to calibrate other pressure gauges • A linear relationship exists between the applied pressure and the height of the measuring capillary.

• The gas should obey Boyle’s law • Cannot be used in an application where the use of mercury is hazardous • Sensitive to condensed vapors, if present in the sample of gas. • Cannot give a continuous output