How to measure flow rate of solid materials? - Gravimetric Feeder

Determination of flow rate of solid materials is important to measure the flow rates of coal, cement, powdered chemicals, paper and fruits.

Belt feeders are compact, factory-assembled devices that use belts to transport the material through a weight sensing mechanism. In the case of the meters, an uncontrolled flow of solids passes through a constant speed belt and the belt load signal is therefore a function of the gravimetric flow.

It incorporates a constant speed belt coupled with a gate to modulate the solids flow rate such that belt load is balanced by an adjustable poise weight. 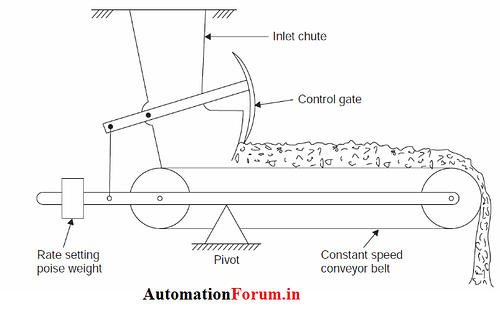 Here the belt load is balanced by a mechanical beam and poise weight system which energizes one or other of two clutches via a pair of mercury switches energized by a magnet attached to the beam. 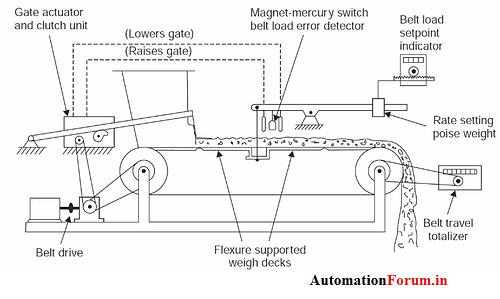 The gate is modulated as required to maintain the desired load of the belt as established by the position of the balance weight on the balance beam. It can be seen that this feeder will maintain the load of the band independently of the changes in the density of the material, subject to the limits of volumetric control of the gate.

It can be seen that this feeder will maintain the load of the belt independently of the changes in the density of the material, subject to the limits of volumetric control of the gate. The belt load set point is indicated by a mechanical counter oriented to drive the balance weight of the beam.

A second counter adapted to the belt transmission totals the length of the belt traveled. By varying the drive gears, these counters can be provided to read directly. The total weight fed can be calculated by multiplying the readings of the two counters.

In the case of the pneumatic system, first adjust the weight of the tare with the beam in the central position and the location of the nozzle with respect to the flapper. 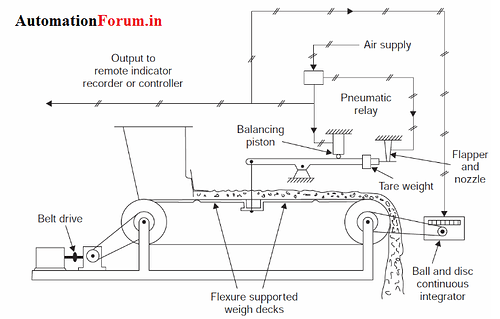 When the material crosses the band, the movement of the beam chokes the mouthpiece. The back pressure of the nozzle is imposed on the pneumatic relay, which in turn increases the outlet pressure until the compensating piston balances the beam. Therefore, the equilibrium pressure is proportional to the load of the band and since the speed of the band is constant, the equilibrium pressure is proportional to the measured weight rate.

The feed rate of all belt-type gravimetric feeders is a function of the belt speed and the belt load. Belt speed is normally expressed in terms of meter per minute, while belt load is defined as kg per metre of belt.