How to investigate Drill life?

Drilling is one of the most popular holes in production methods. Both in mass production and in small batch production, twist drills are the most common tools used. They are increasingly made from cemented carbides, but drills made from high-speed steels are still in use mainly for economic reasons.

For example, it concerns drilling small diameter holes, where there is a very high risk of destruction of brittle cemented carbide drills.

The possibility of reducing cutting forces and torque in drilling is the second method. Experimentally investigated the influence of various modifications of the chisel edge.

One of the ways of tool wear resistance improvement is ·application of thermochemical treatment to their working surfaces. Three coatings were applied: titanium carbide, titanium nitride and diamondlike thin layers.

Measurements of tool wear were performed for each drill after every 50 holes were made and drilling continued until the wear limit of the tool was reached. Dominated by flank wear in these cutting conditions was taken as an indicator of tool wear. Measurements were performed using a special device on a microscope. 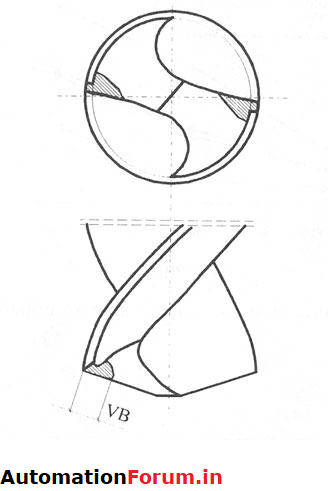 Tool wear characteristics, average in glass fibre laminate drilling for each group of twist drills is shown in figure down below. For these cutting conditions, flank wear VB=0.25 mm was taken as limiting value because higher values cause the appearance of burr that is unacceptable in this finishing operation.

Experimental average tool wear characteristics for hardboard drilling are shown in below. Tests were stopped at lw=800 mm because of drill flutes loading with work material and appearance of tool wear trend shown 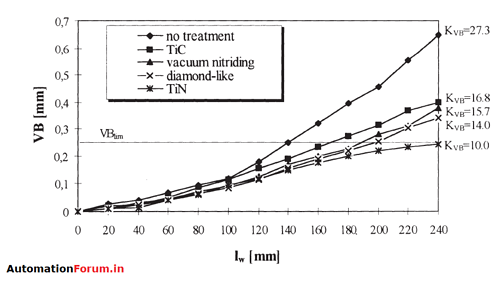 Influence of edge modification on cutting force and torque:

The second part of the investigations was devoted to changes in the geometry of twist drills and their influence on cutting forces and torque. Changes in drill geometry relate to the edge of the chisel as shown in fig below: 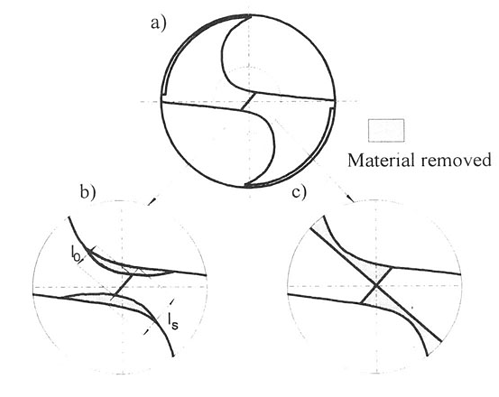 The chisel edge was partly (fig. b) or entirely (fig. c) removed. For comparison also twist drills without modifications (fig. a) were investigated.

Investigations were performed on a stand shown in fig below. Feed force Fr and torque M. were measured by means of 4-component Kistler 9272 dynamometer.

The following cutting conditions were applied: