How to connect two AC motors in parallel?

Is it possible to connect two AC motors in parallel?

Yes, you can connect and run two AC motors, which should be identical, together on the same shaft. 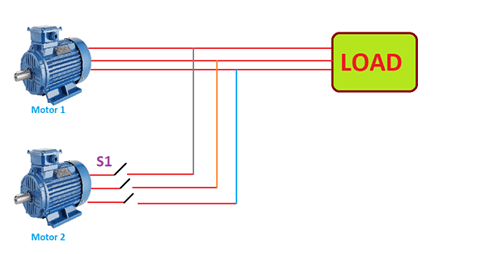 Depending on the needs of the application, a stepper motor can be wired in series or parallel. A series-connected motor produces more stall torque, but torque decreases rapidly as velocity rises. A parallel-wired motor’s (lower-than-series) torque is typically maintained at higher speeds.

Parallel wiring has 1/4 the resistance and inductance of series wiring, resulting in more current and consequently, more heat. As a result, whenever you wire a motor in parallel, we recommend limiting its duty cycle to 50% and using Auto-Standby on the drive. This gives the motor a chance to cool down between runs. The temperature of the motor case must always be kept below 100°C. If the motor temperature rises above 80°C, take steps to prevent it from reaching 100°C, such as installing a heat sink, lowering the duty cycle, lowering the current, and so on. Heat sinks are usually the most effective way to keep a motor cool.

There are three major methods for synchronizing a pair of motors. They are

• By using a Single Drive

By using a Single Drive

There are drives available that can power multiple motors. A separate encoder is installed in each motor. Multiple I/O boards are used in the multi-axis drive to accept feedback from each motor. The drive’s algorithms use feedback to reduce the differential to zero.

Although this technique works well with motors that are very closely matched, it is not the most efficient method. A power bridge for each axis is typically used in multi-axis drives, which are controlled by a power controller. Putting multiple drives into a single package is analogous to this design, with the same issues of power consumption and thermal management. Simultaneously, it lacks the flexibility and levels of control that standalone drives provide. Discrete drives have higher efficiency.

Smart drives today have the processing power and memory to do more than just provide commutation commands to the motor; they can also act as controllers. These drives can close velocity and position loops when connected in a master-slave architecture, making them suitable for synchronization.

Bidirectional or ring-based network topologies that communicate over digital buses with short cycle times and minimal latencies are required for master-slave architectures. The specifics differ from one protocol to the next. In an EtherCAT system, for example, the master axis drive sends a telegram to the slave drive, which includes a motion command and an encoder feedback interrogation. The encoder provides feedback in the event of a slip or change in one motor, allowing the system to compensate and maintain the desired speed or position.

PID control can be used to synchronize the velocity and position of two motors. Each drive sets its own motor to the same speed and position, then uses encoder feedback to bring the differential velocity to zero. When used for position matching, PID control is most effective; when used for velocity matching, a cumulative error can be problematic, depending on the application.

Web processing is one of the applications for velocity matching. The web must always be pulled to avoid jams and damage to the web; the wind axis must turn a fractional amount faster than the follower axes. The master-slave architecture is best suited for this type of synchronization. The designated master axis is the wind axis. It drives the slave axes fractionally slower than the master axis speed using feedback from the slave axes. A discharge conveyor that must be matched to the speed of upstream equipment is another common example. The loss of position control is one of the trade-offs of velocity synchronization.

Parts and equipment must be precisely synchronized in press applications. A servo press transfer application, which requires the synchronization of three servo axes with the press position, is a good example of an angle-matching application. Angle matching can be accomplished with the help of PID control. A master-slave architecture could also be used to complete the task.

The term “torque matching” does not imply that both motors produce the same amount of torque. Rather, it entails making sure that both motors’ torque is applied to the load at the same time. Consider a crane lifting a section of aircraft fuselage from one end to the other. The motors driving the two cranes must start at the same time and run for the same number of counts in order to keep the part level. Any difference between them could cause injury or damage to the part.

The many aspects to consider while choosing AC motors are

• Can reduce the cost of operation

• Need lots of wires for connection

• When it is necessary to pass the exact same amount of current through the units, the parallel connection fails.