How to avoid common mistakes in field instruments calibration?

A method of applying known inputs to a measuring system and observing and comparing the output with standard instruments developed from comparisons with main standards kept at Standard Laboratories.

Calibration is performed at many points of measurement; rather than calibrating at each point, specific points are chosen and calibrated, with the expectation that the error for the entire range of measurement will remain within a small range. Single-point, two-point, and three-point calibration are the three forms of calibration. The number of points that need to be calibrated.

What does mean by Calibrators?

In a laboratory context, a calibrator is an instrument or solution of a known measure or quantity that is used to calibrate instruments or procedures. In other terms, it’s a tool or a standard that ensures a device’s correctness. A calibrator is used as the baseline or actual measure to accurately calibrate laboratory equipment. Adjustments are made to re-calibrate or fix a device if it does not precisely measure the calibrator substance or object.

How to choose a calibration laboratory - things to consider

What is an instrumentation calibration error?

The disparity between the values that an instrument indicates and the real values. A correction card is usually put next to the instrument to indicate the instrument fault. Also known as the calibration mistake.

How does calibration helps to improve plant sustainability?

Though particular causes of gauge drift may vary based on the sort of gauge you’re using, the following are some of the most typical causes:

Calibration uncertainties and why is it important for technicians to understand it?

Some of these issues can be prevented by properly handling gauges and keeping them out of harm’s way. However, because calibration drift can happen over time, especially if the instrument is used frequently, it’s impossible to completely avoid loss of accuracy.

How Can You Solve Gauge Calibration Drift?

Though you can take efforts to avoid some environmental causes of gauge drift, having your gauges professionally calibrated on a regular basis is the best approach to protect your equipment. Instrument calibration may be required yearly or more frequently depending on your industry.

You may want to have a gauge calibrated in addition to having it adjusted on a regular basis when:

Instrument technicians must be able to identify and rectify instrument calibration faults quickly and accurately. Routine calibration comprises the majority of the time for certain technicians, particularly those who work in industries where calibration accuracy is required by law.

Other technicians may only have to calibrate once in a while, but they must be able to diagnose calibration faults quickly when they produce problems in instrumented systems. This section discusses common instrument calibration errors and the processes for detecting and correcting them.

The response of any linear instrument is described by the slope-intercept form of a linear equation:

b is zero adjustments.

The function is shifted vertically on the graph by a zero-shift calibration error, which is equivalent to changing the value of b in the slope-intercept equation. This mistake has the same amount of inaccuracy over the whole range since it impacts all calibration points equally.

Using the same example of a pressure transmitter with an input range of 0 to 100 PSI and an output range of 4 to 20 mA: 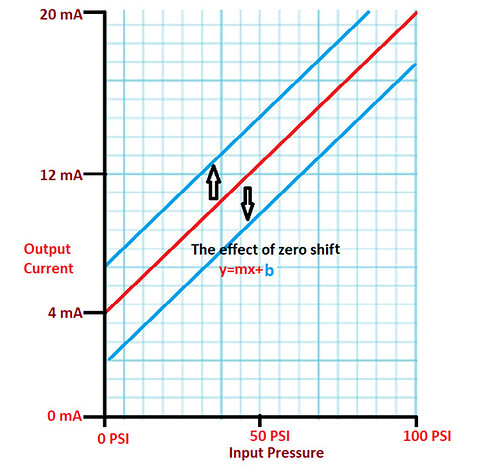 A zero-calibration error in a transmitter can be addressed by carefully shifting the “zero” adjustment until the response is perfect, thereby changing the value of b in the linear equation.

On an input/output calibration graph, Span error is represented by a line that is not parallel to the ideal line. To put it another way, both lines are straight, but their slopes differ. 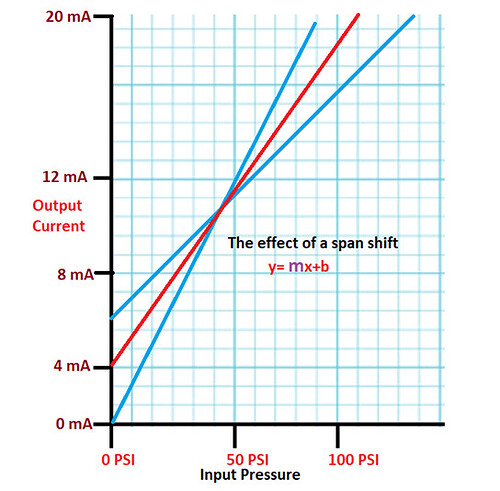 The largest deviation of the instrument response curve from the linear fitted curve, where the slope is the amplification coefficient, is known as the linearity error.

Because the slope-intercept equation exclusively covers straight lines, this type of mistake has nothing to do with a change in either zero (b) or span (m).

Some instruments have the ability to modify the linearity of their response, but this adjustment must be done with care. 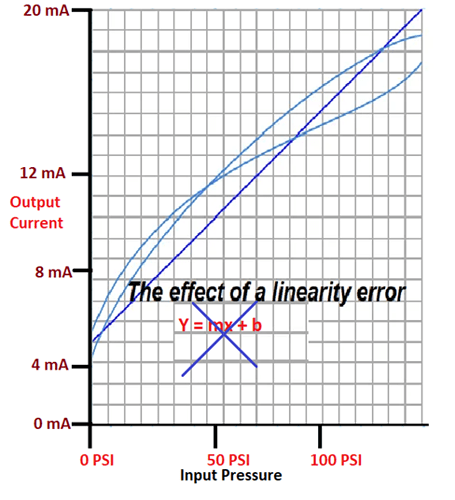 Because the behavior of a linearity adjustment is specific to each kind of instrument, you must refer to the manufacturer’s documentation for information on how and why it works.

When the instrument responds differently to an increasing input than to a decreasing input, this is known as a hysteresis calibration error. 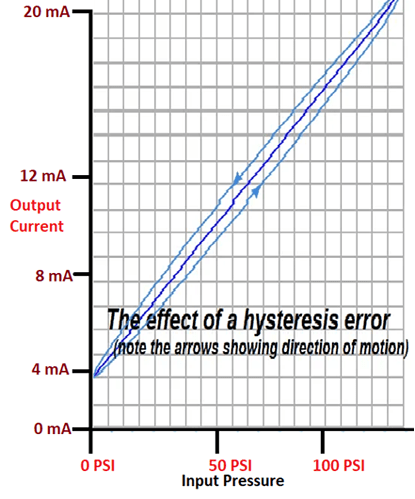 The biggest difference in output at any measurement value within the sensor’s specified range when approaching the point with increasing and subsequently decreasing pressure is known as the hysteresis error of a pressure sensor.

The precision is, of course, better than the manufacturer’s specifications when employing the maximum working pressure. Hysteresis is also commonly stated as a mix of mechanical and thermal hysteresis.

Most calibration faults are a combination of zero, span, linearity, and hysteresis issues in practice. One thing to keep in mind is that, with very few instances, zero mistakes always come with other types of errors. In other words, finding an instrument with a span, linearity, or hysteresis error that does not also have a zero error is extremely rare. As a result, technicians frequently run a single-point calibration test on an instrument to determine its calibration health. If the instrument operates as expected at that point, its calibration across the full range is likely to be good. If, on the other hand, the instrument fails to meet specifications at that moment, it must be recalibrated. 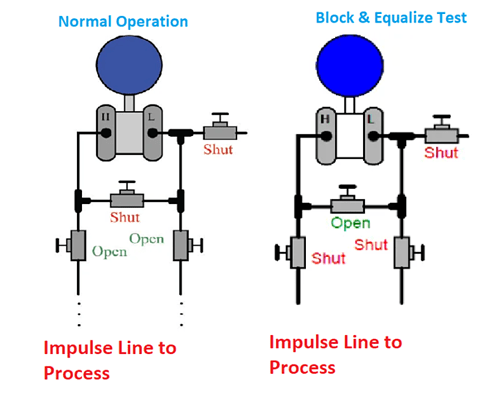 Because most DP instrument ranges include 0 PSI, this is a straightforward single-point check. If a technician “blocks and equalizes” a DP instrument and it reads zero correctly, the calibration is likely to be good throughout the range. If the DP instrument does not read zero during this test, it should be recalibrated immediately.