How to amplify pneumatic signal

In a pneumatic system, information is carried by the pressure of the gas in a pipe. Raising the pressure at the one end will propagate down to the other end such that in a system transducer varies the air pressure at one end of the line in response to some controlled variable, then that same pressure occurs at the other end of the pipe after a delay. To produce a controlled action we have to amplify the signal which will not enough to produce a control action. So we need amplify the pneumatic signal to a control action.

A pneumatic amplifier also called a booster or relay, raise the pressure and airflow volume by some linearly proportional amount from the input signal. 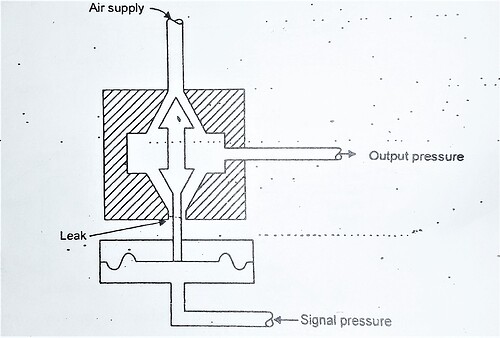 A schematic diagram shown above is a fundamental type of pneumatic amplifier. The input to the amplifier is the signal pressure which moves the diaphragm attached to the plug in the amplifier system. The actuator movement close and open the air supply opening and thus control the output pressure of the air flow.

If the signal pressure increases the plug body blocks the input line and reduce the air pressure. The above-shown figure is a reverse acting amplifier. Because the high-pressure signal causes the output pressure. It can be done in reverse if flow through the amplifier is in reverse direction.