What is a fingerprint scanner?

How does a fingerprint scanner work?

The ridges and valleys of a finger’s pattern are captured by fingerprint scanners. The device’s pattern analysis/matching software then compares the information to a database of registered fingerprints. A successful match means that a user’s identity has been verified and that access has been given. The fingerprint scanners are mainly classified into three types based on the type of scanner being used:

Optical fingerprint sensors have existed for quite some time. By flashing a bright light over your fingerprint, an optical scanner creates a digital image of it. The digital image is created by a light-sensitive microchip that examines the ridges and valleys of the fingerprint, converts them to 1s and 0s, and generates the user’s unique code. The diagram below depicts how the light source reads the fingerprint and where the data is sent. The drawback is that a digital photo can be copied, which is extremely unusual. 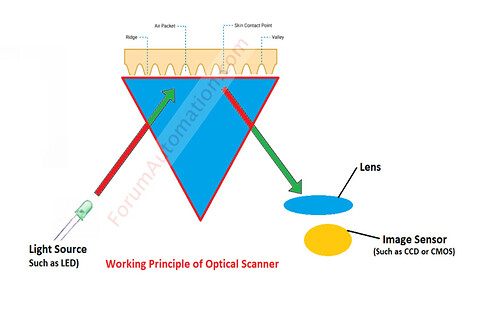 • Less costly than the ultrasonic sensor

• They can be included in a capacitive display screen, allowing for in-display fingerprint scanning and allowing manufacturers to create devices with larger screens and fewer bezels.

Disadvantages of the optical sensor

• The fact that most CCD components can’t always tell the difference between a picture of a finger and the finger itself is a key drawback of optical fingerprint sensors.

• Keep in mind that the technology is only capable of capturing a two-dimensional image. Prosthetics and high-quality photos can be utilised to deceive the system.

The capacitive fingerprint scanner, in further depth, uses small capacitor array circuits to track the minutiae of a fingerprint. It uses the ridges of your fingerprint, which are put over the conductive plates, to modify the charge stored in the capacitor, while the valleys (air gaps) remain intact. These changes are tracked by an operational amplifier integrator circuit, which is subsequently recorded by an analog-to-digital converter and evaluated.

• Cheaper compared to the optical sensor

• Capacitive scanners can be mounted on a solid surface or a physical button. Other input movements, like swiping and scrolling, can be used in conjunction with fingerprint recognition.

• Cannot use an in-display fingerprint sensor

Ultrasonic transmitter and receiver are used in the most recent fingerprint scanning technology. An ultrasonic scanner produces and sends an ultrasonic pulse against the finger in general. Some of the pulses are absorbed while some bounce back to the sensor due to the ridges, valleys, pores, and other annoyances of the finger. In essence, the pulse creates a three-dimensional representation of the fingerprint.

• Ultrasonic scanners can capture a three-dimensional image of the fingerprint in great detail.

• They’re safer than capacitive scanners and, of course, more dependable than optical scanners.

• As an in-display fingerprint scanning solution, an ultrasonic scanning module can be used, allowing for vast screen real estate and bezel-less designs.

• They also work in less-than-ideal circumstances, such as when the users’ hands are unclean or wet. Unlike capacitive scanners, they do not rely on electrical charges.

• Because of the fundamental operational mechanism, they are much slower than capacitive scanners.

• Because the ultrasonic pulse cannot penetrate through a thick surface, scanners used as in-display fingerprint scanners do not operate properly with various screen protectors. What are the things that need to be considered while choosing a fingerprint sensor? Before deciding on a biometric modality, there are a few crucial variables to consider.

These are some of them:

Accuracy When picking a biometric modality, accuracy is one of the most critical factors to consider. It is dependent on a number of factors, including the mistake rate, the false acceptance rate (FAR), the identification rate, the false reject rate (FRR), and other biometric system standards.

Integration This biometric device should be able to integrate and customize software from a variety of vendors. Because of its universality, the device may last longer.

As biometric identification systems grow more common, greater attention is being paid to the possibility of direct attacks, in which potential intruders obtain access to the system by interacting with the system input device. Spoofing assaults are the term for such attempts. For the correct biometric modality, strong anti-spoofing protection is a must-have capability.

When picking the best and most effective biometric hardware modality, the cost is a significant issue to consider. Certain modalities may be more cost-effective than others, depending on the underlying technology and hardware features. It’s critical to remember that an initial investment in biometrics can and frequently is recouped in a short period of time, resulting in a quick return on investment (ROI).

Severe cold settings risk exposing the subject’s skin and can also cause problems with the acquisition device’s operation. The biometric equipment should be built to resist long periods of exposure to extremely cold temperatures. Enrollment in the following modalities usually requires skin exposure: face, fingerprint, palm print, and hand vein. Fingers become stiffer in cooler temperatures, which may impact the quality of fingerprint capture because flexible skin is essential for high-quality prints. However, studies show that fingerprint sensors are usable in cold situations because removing one’s gloves and using the scanner takes about the same amount of time as retrieving and using car keys while bare-skinned. In such instances, enrollment can be done indoors.

Solid-state sensors get excessively hot to the touch in extreme outdoor temperatures, necessitating the use of a cover to protect them from direct and extended sunshine. However, any optical sensor that requires human contact for acquisition might be said to be in the same boat. As a result, the fingerprint reader you use should be able to withstand intense temperatures. In intense sunshine, operators may have difficulty using portable face cameras and iris scanners. Make sure that the biometric equipment you choose can work in strong light. DNA biometrics are not suitable for usage in hot environments because long-term exposure causes DNA degradation.

Dust can contain particles smaller than sand, and the soluble salts found in arid-zone dust pose a difficulty for biometric capture devices. Interference of moving components, fouling, corrosion, and enhanced electrical conductivity are all frequent equipment problems caused by dust. Larger dust particles can abrade the exposed parts of the equipment, such as the fingerprint sensor plate.

The success of biometric identification management deployment is dependent on user acceptability. Certain biometric modalities may carry a stigma (for example, fingerprint biometrics and criminality), which might have a detrimental impact on user perception in some societies. It’s critical to know which modalities are appropriate and which may cause user acceptability concerns.

High humidity might result in damp and swollen fingers, making it difficult to get good prints. It can also cause issues with equipment. Choose fingerprint readers with durable construction and the ability to endure high humidity to avoid accuracy loss.

It’s critical to think about the setting where the biometric system will be used. Systems must be durable in severe situations such as humid or rainy conditions. As a result, it’s critical to conduct an infrastructure assessment before deciding on a biometric modality. Voice recognition may be useful for recognizing people over the phone or in confined spaces. However, it may not be suited for use in wet situations because the microphone may be ruined.

The performance of biometric systems can be influenced by population dynamics such as age, profession, and so on. It is far more difficult to enroll fingerprints of senior persons or small toddlers. It might be difficult to obtain good prints from people who work in certain occupations, such as manual labor. When compared to fingerprint scanning, iris recognition has a high level of permanence following cataract surgery, but it requires more cooperation from the subject.

When deciding on the best and most successful biometric modality, the cost is a major consideration. Depending on the hardware characteristics and underlying technologies, some modalities may be more cost-effective than others.

Biometric technologies that require interaction are also something to think about before making a decision. For sanitary reasons, industries that pay great attention to infection control may prefer to use contact-free methods. Contactless modalities such as face and iris scanning are examples, whereas contact modalities such as fingerprint recognition are required. Touching a fingerprint sensor, on the other hand, is no riskier than touching a door knob.

The use of biometrics raises a number of legal concerns, including privacy, reliability, and remedy. Users may be concerned about their biometric sample being misused or being used for purposes other than those intended. Because of their familiarity, people generally trust fingerprints, but they may be wary about voice recognition.