How deos a DCS works?

DCS (Distributed Control System) is a control system where each individual controller communicating to a central computers acting as workstations.

Such a system has the advantage that failure of a single component will not cause system failure, shutdown; sometimes called graceful degradation. And a hardware or software failure will not go undetected.

The working of DCS system is based on both hardware and software working.

Working of DCS can be divided into two parts: 1 Hardware flow 2. Software flow. 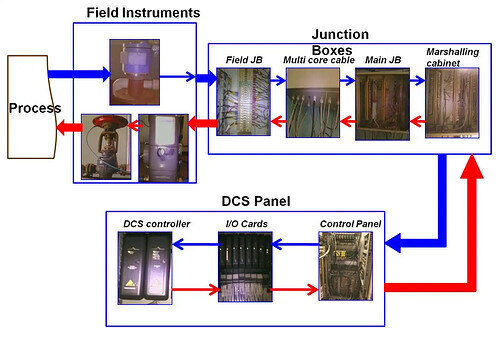 From field junction box through multicore cable, it goes to the main junction box. From it comes to Marshalling cabinet, where wires enter into control panel from the junction.

In control panel, controller and I/O cards are placed. After signal entering the control panel, the signal wire is connected to the I/O card of the controller with or without Relay card. Controller thereby processes the data according to the logic created and gives output to the Final Control Element through output cards, following the same route.

The basic purpose of the software is to scan. There is a scan cycle that must be completed for the execution of a necessary instruction to control the process. The user establishes the scan period while configuring DCS and the following steps are performed for each scan period:

What is 5 level system in DCS? DCS (Distributed Control Systems)

Almost all manufacturer makes the 5 level DCS system. The 5 levels are described below. [image] Level 0 Level 0 is the field device level. All the field devices such as control valves, transducers, transmitters etc, are at this level. Input devices (transmitters etc.) and output devices (control valves, etc.) are connected to input/output units (I/O units). I/O units convert the 4-20mA or digital signals to specially coded signals for the Fieldbus. And also converts the coded signal to 4-…