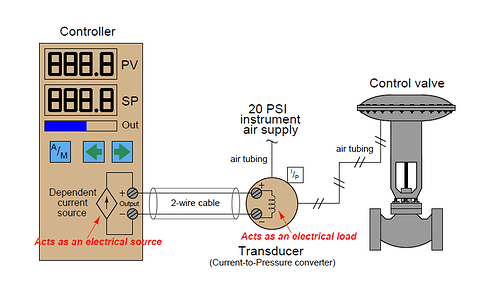 The controller can work in automatic and manual mode.

There will be a dependent current source in the controller o/p module, which provides both the current source to the I to P converter. Its basic purpose is to maintain the constant current in the loop circuit.

If the final control element has to be controlled to minimum working condition, then the output of the controller will be 4mA and 20mA for maximum controller action. For 50% output, 12mA current produced.

Here in the above-shown figure, the final control element is air to open control valve. The minimum current is to close the valve and maximum current to fully open the valve.