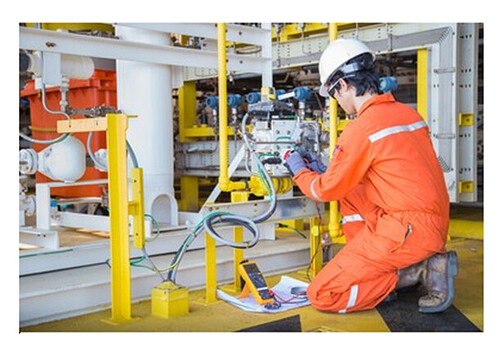 What is meant by hazardous area?

A “hazardous area” is defined as an area where flammable or explosive gases, dust, or vapors are present or may be present in sufficient quantities in the atmosphere. When three basic conditions are met in such an environment, a fire or explosion can occur. The “hazardous area” or “combustion” triangle is a term used to describe this region. 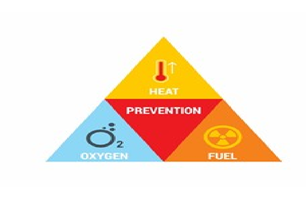 A method of analyzing and classifying a potentially hazardous area is required to protect installations from a potential explosion. The goal is to ensure proper equipment selection and installation, which will ultimately prevent an explosion and ensure human safety. The methods for classifying an installation vary depending on where it is located in the process area, but there are two main types of classification. This is referred to as Zoning in countries that have adopted the IEC (International Electrotechnical Commission) philosophy, whereas in North America, installations are classified by Classes, Divisions, and Groups to determine the level of safety required.

A Hazardous area is defined based on the following three criteria. They are

• The type of hazard

• The likelihood of the hazard being present in flammable concentrations

The Type of Hazard

The type of hazard either in the form of a gas or vapor or dust or fibre.

The type of hazard is mainly classified into two types based on whether it is mining or above surface industry.

Groups II & III:- Depending on the hazard, they are further subdivided. The amount of energy required to ignite the most explosive mixture of the gas with air is used to group II gases together. The nature of the explosive atmosphere for which Group III dust is intended is used to divide it into subgroups.

The hazard level of gases rises from IIA to IIC, with IIC being the most vulnerable. This group of substances is extremely flammable, with hydrogen being the most flammable. The temperature class, or T-Class Rating, is determined by the gas’s auto-ignition temperature, which is detailed below. 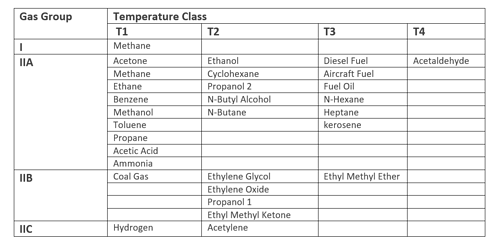 The Likelihood of the Hazard

The probability of the hazard being present in a concentration high enough to cause an ignition varies by location. For most installations, the risk is proportional to the duration of the hazard (gas, vapor, dust, or fiber). To classify this danger, an installation is divided into risk areas based on the length of time the hazard is present. Zones are the names given to these areas. There are three zones for gases, vapors, dust, and fibers.

Hazardous areas are defined by DSEAR as “any place where an explosive atmosphere may exist in sufficient quantities to necessitate special precautions to protect workers’ safety.” ‘Special precautions’ should be interpreted in this context as relating to the construction, installation, and use of apparatus, as defined in BS EN 60079-101.

The method of analyzing and classifying the environment where explosive gas atmospheres may occur is known as area classification. The main goal is to make it easier to choose and install apparatus that can be used safely in that environment while taking into account the flammable materials that will be present. The original scope of this analysis was specifically extended by DSEAR to include non-electrical sources of ignition and mobile equipment that poses an ignition risk.

Hazardous areas are divided into zones based on the frequency and duration of the presence of an explosive gas atmosphere, as follows:

• Zone 0: In Zone 0, explosive gases is present in the atmosphere continuously or for longer periods.

• Zone 1: In this zone, explosive atmosphere gas is present in normal operation conditions

• Zone 2: An area where an explosive gas atmosphere is unlikely to occur in normal operation and if it does, will only last a few minutes.

Various sources have proposed time limits for these zones, but none has been formally adopted. The most commonly used values are:

• Zone 2: Explosive atmosphere for less than 10h/yr, but still sufficiently likely as to require controls over ignition sources.

These values are the most appropriate when people want to quantify zone definitions, but for the vast majority of situations, a purely qualitative approach is sufficient. When a plant’s hazardous areas have been classified, the remaining areas are designated as non-hazardous, also known as ‘safe areas.’

The consequences of a release are not taken into account in the zone definitions. If this is a critical issue, it could be addressed by improving equipment specifications or tightening controls on activities permitted within the zone. The option of specifying zone boundaries more conservatively is not generally recommended because it complicates equipment selection and is illogical in terms of controlling health effects from vapors assumed to be present. When occupiers designate large areas as Zone 1, the practical implications should be discussed during the site inspection. 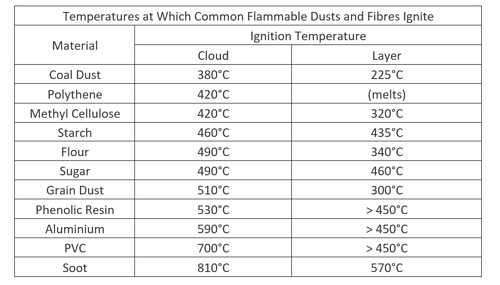 Within these hazardous area zones, various types of equipment can be used to ensure that the risk of an explosion is eliminated or greatly reduced. Protection concepts determine that this equipment be designed and manufactured in accordance with specific construction parameters. These ideas can be divided into four categories.

Ex i is an explosion-proofing concept in which the electrical energy within the equipment is limited to a level below that which could cause ignition or limit the heating of the hazardous area equipment’s surface. The “ia” and “ib” subtypes of Ex I protection is the most common. During operation, type “ia” protection allows for the occurrence of two faults. During operation, type “ib” explosion protection allows for the occurrence of one fault.

The equipment that could cause an explosion is contained within an enclosure that can withstand the force of an explosion while also preventing transmission to the hazardous environment outside. The Ex-d flameproof method of explosion protection also keeps the dangerous atmosphere out of the enclosure and away from the equipment.

Ex m is an explosion-proofing concept in which potentially ignitable equipment is encased in a compound or resin to keep it from coming into contact with the explosive atmosphere. Under normal operating conditions, the concept also limits the equipment’s surface temperature.

Ex e is an explosion protection concept that is applied to an installation to ensure increased security against the risk of excessive temperatures and sparks from hazardous area electrical equipment. This method of protection forbids the use of equipment that normally causes sparks.

One process ensures that the pressure inside an Ex p enclosure is sufficient to prevent the entry of flammable gas, vapor, dust, or fibre, which could result in ignition. Another process dilutes any potentially explosive atmosphere by maintaining a constant flow of air (or an inert gas).

Every piece of equipment that has the potential to arc and ignite is submerged in a protective liquid or oil. The oil acts as an insulator, preventing ignition.

All equipment that has the potential to the arc is contained within a quartz or glass powder-filled enclosure. The powder filling keeps the contents from igniting.

Electrical equipment in hazardous areas with the potential to the arc is not capable of igniting an explosive atmosphere around it, according to this type of explosion protection. This can be further broken down into the following groups:

Ex nR – Where components are tightly encased to prevent ignition and restrict breathing.

Ex s Special As the name implies, there are no specific parameters or construction rules for this type of explosion protection. In essence, it is any method of explosion protection that can provide a pre-determined level of safety to ensure that no ignition can occur. As a result, it does not fall under any one type of protection and maybe a combination of several. 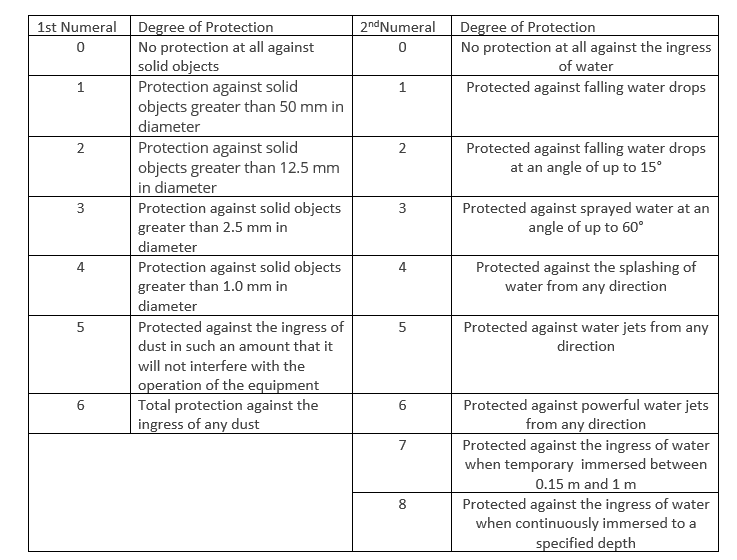 Type 3 An enclosure designed for outdoor use to provide some protection from windblown dust, rain, sleet, and damage caused by external ice formation.

Type 3R An enclosure designed for use outside, primarily to provide some protection from falling rain and damage caused by external ice formation.

Type 3S An enclosure designed for outdoor use, primarily to provide some protection from rain, sleet, and windblown dust, as well as to allow the operation of external mechanisms when ice is present.

Type 4 An enclosure designed for indoor or outdoor use to provide some protection from wind-blown rain and dust, splashing water, hose-directed water, and damage caused by external ice formation.

Type 4X An enclosure designed for indoor or outdoor use to provide some protection from corrosion, windblown rain and dust, splashing water, hose-directed water, and damage caused by external ice formation.

Type 6 An enclosure designed for indoor or outdoor use to provide some protection from falling dirt, hose-directed water, water entry during occasional temporary submersion at a specified depth, and damage from external ice formation.

Type 6P An enclosure designed for indoor or outdoor use to protect against falling dirt, hose-directed water, and water entry during prolonged submersion at a specified depth, as well as damage caused by external ice formation.