Gas analyzers work on the principle of absorption of light by the gas under test. Absorption analyzers need only shine a beam of light through an unheated sample chamber, then measure how much of specific wavelengths were absorbed by the sample. The amount of light absorbed is proportional to the concentration of the component in the fluid which absorbed light.

Hey check out the Working of Infrared Gas detector 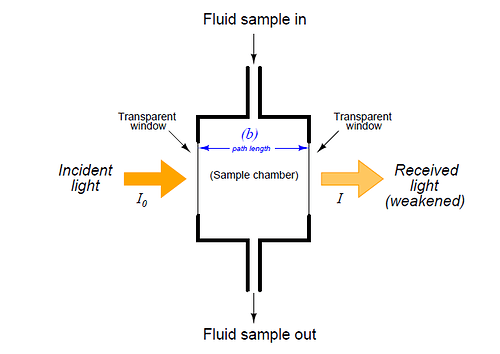 In every absorption-type optical analyzer, the fundamental equation relating photon absorption to substance concentration is the Beer-Lambert Law:

There are two types of spectroscopy: 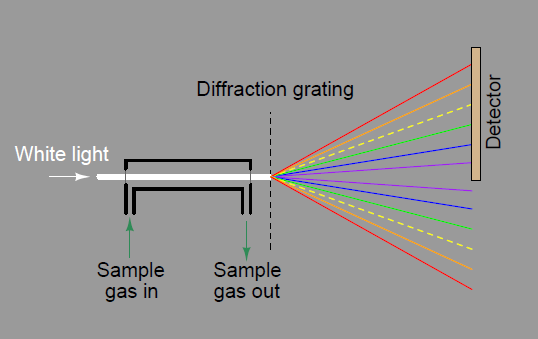 The dispersive spectrometer is constructed as shown in the above picture. The process fluid is made to pass through a chamber. Whitebeam of light is passed through the transparent walls of the chamber. The light escaped from the chamber is diffracted using a diffraction grating to disperse the different wavelengths of light from each other so they may be independently measured.

Where some wavelengths of that light would be attenuated by interaction with the process fluid molecules. In this illustration, the sample gas absorbs some of the yellow light wavelengths, resulting in less yellow light reaching the detector array.

Industrial non-dispersive analyzers typically use either infrared or ultraviolet light sources, because most substances of interest absorb wavelengths in those regions rather than in the visible light spectrum.

There are two types of non-dispersive analyzer

Non-dispersive analyzers employ the principle of spectrographic absorption to measure how much of a particular substance exists within a sample. NDIR gas analyzers shine light through a windowed sample chamber (typically called a cell ), through which a fresh flow of process gas continually moves. Certain “species” (compounds) of gas within the sample stream absorb part of the incident light, and therefore the light exiting the cell becomes partially depleted of those wavelengths.

Thermopiles are used as detectors. The simplest style of non-dispersive analyzer uses a single light source, shining continuously through a single gas cell, and eventually falling on a small thermopile which converts the received infrared light into heat, and then into a voltage signal.

One way to improve on the single-beam analyzer design is to split the light beam into two equal halves, then pass each half-beam through its own cell.

Only one of these cells will hold the process gas to be analyzed – the other cell is sealed, containing a “reference” gas such as nitrogen that absorbs no infrared light. At the end of each cell we will place a matched pair of thermopile detectors, connecting these detectors in series-opposing fashion so equal voltages will cancel 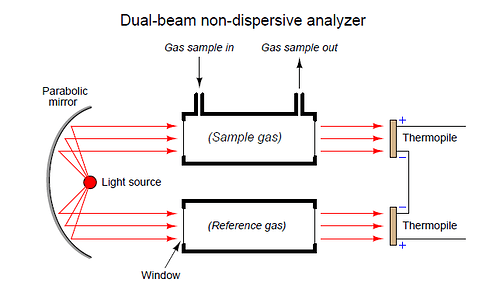 The addition of a reference gas chamber and second thermopile detector completely eliminates the ambient temperature problem seen in the single-detector apparatus.

If the analyzer’s temperature happens to rise or fall, the voltages output by both thermopiles will rise and fall equally, canceling each other out so that the only voltage produced by the series-opposing pair will be that produced by differences in received light intensity.