Furnace exposure test is entailed to subject the structural assembly of the equipment with Temperature-time graph. The cause in equipment or components is verified by changing the temperature by regulating the furnace fuel and air flow rates.

The temperature-time curves adopted by the International Standards Organizations (ISO 834, 1975), the American Society for Testing and Materials (ASTM E-119, 1983), and the British Standards Institution (BS 476-1972). 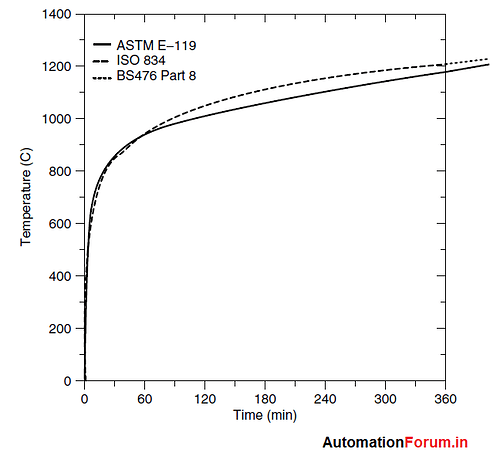 Two important complications inherent in the use of standard temperature-time exposures are:

The following correlations are intended to provide estimates of the expected fire resistance measured in furnace exposure tests with different types of exposed structures. A more complete set of correlations and standard calculation methods for fire barrier assemblies made of either structural steel, various forms of concrete, masonry, or timber and wood, has been compiled by ASCE and SFPE (1995).

Steel columns – Unprotected steel columns have been found to have furnace endurance times proportional to (W/D)n, where W is column weight per unit length (Ms/L), D is the heated perimeter of a column section, and n is an exponent equal to 0.7 for W/D < 10 lb/ft-in, and to 0.8 for W/D > 10 lb/ft-in.

Steel beams – The fire resistance of steel beams has been found to vary with the parameter.

where h is the thickness of a particular spray-applied insulation (in), W is the weight of the beam per lineal foot (lb/ft), and D is the exposed perimeter of the beam cross-section (in).

Concrete slabs – The fire endurance of concrete walls and floor slabs depends upon the wall/slab thickness, type of aggregate, steel reinforcing properties, the applied load, and the type of restraints. Fleischmann (1995) has reviewed the analytical and empirical methods for evaluating these effects.

Wood structures – The fire resistance of an exposed wood structure is limited by the rate of wood charring since the char has essentially no load-bearing capacity. According to White (1995), charring occurs when the heated wood temperature reaches about 290 ◦C (554 ◦F), and there is a steep temperature gradient in the uncharred wood. Therefore, most of the uncharred wood remains cool enough to retain its original strength.

A variety of other high-intensity fire resistance tests are used for special equipment such as flammable liquid piping components. Some of these tests involve burner flames, others involve pool fires or jet flames.