A F&G safety system continuously monitors for abnormal situations such as a fire, or combustible or toxic gas release within the plant; and provides early warning and mitigation actions to prevent escalation of the incident and protect the process or environment.

A typical F&G safety system comprises detection, logic control and alarm and mitigation functions. Logic solver is the central control unit of the overall F&G detection and control system. The controller receives alarm and status or analog signals from field monitoring devices required for fire and gas detection. The controller handles the required actions to initiate alarms and mitigate the hazard

Components of a Good Fire and Gas System 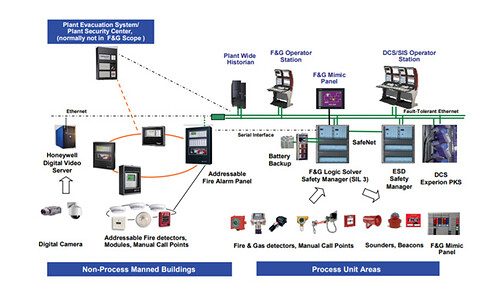 Detectors in Fire and Gas Systems

The three types of Flammable gas detectors are:

Set Point : Catalytic detectors have a typical recommended minimum alarm setting of 20 % LFL and 60 % LFL to indicate low and high level of gas 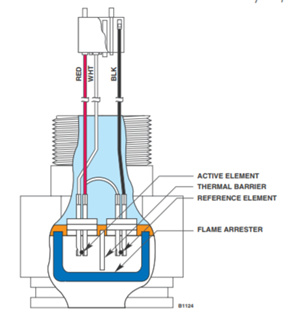 Working Principle : Infrared Gas Detectors make use of the property of Hydrocarbons and other gases to absorb infra-red energy at certain wavelengths but not others. For HCs the absorption peak occurs around 3.4 µm. A reference measurement is normally made close to the measurement wavelength that is not absorbed by expected gases. The ratio from the two measurements gives the gas concentration free from variations in signal intensity and detection sensitivity.

Set Point : Infra-red detectors have a typical recommended minimum alarm setting of 20 % LFL and 60 % LFL to indicate low and high level of gas

Working Principle: Open path gas detectors make use of properties of gases to absorb infrared energy at certain wavelengths but not others. This property coupled with high energy sources enables open path detectors to sense gas over relatively long distances. 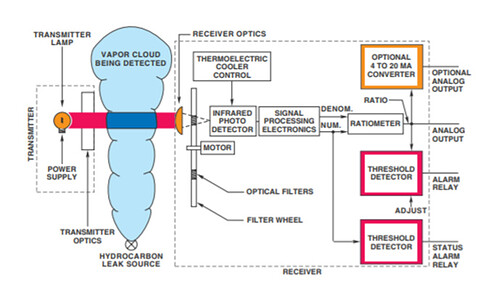 The two types of H2S detectors available are:

This type is based on an electro-chemical cell, developed to react exclusively to H2S. As a result of chemical reaction of the cell organic electrolyte with H2S, an electric current is generated, which is proportional to the H2S concentration in the sample gas.

Set Point : H2S detectors have a typical recommended minimum alarm setting of 5 ppm. If second stage alarm is used, 10 ppm shall be used.

There are two types of smoke as mentioned above

These Detectors have an ionisation chamber with a 8 particle radiator consisting an Americium-241 foil at its centre and it ionises the air inside the chamber.

An electric voltage is applied to the needle electrode and as a result, a known current flows through the detection chamber when the detector is in its normal state. In the event of fire, minute aerosol particles (soot particles, combustion gases etc.) attach themselves to the ionised particles. This increases the resistance in the chamber and consequently reduces the current flow within the detection chamber. This change is registered by Detector’s electronics and a fire signal is sent to the Control Panel. 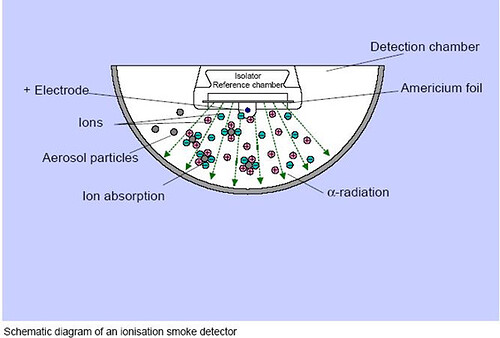 The sensor consists of a transmitter LED and a receiver photo-diode. These two devices are installed at a specific angle to one another and separator by a screen, so that light from the LED cannot impinge directly on the receiver diode.

The transmitter LED emits infrared light into the detection chamber. In the event of a fire, visible combustion products enter into the chamber and some of the light emitted by the LED is scattered by the particles so that it impinges on the receiver diode. This naturally increases the signal level generated by the receiver, which is registered by the detector electronics, which in turn trigger the alarm signal.

Heat or Thermal Detectors register the increase in temperature caused by a Fire.

It triggers automatically when a preset ambient temperature is reached.

It responds when the temperature of the air surrounding the device reaches a predetermined level, regardless of the rate of temperature rise.

• Flame detectors are typically used in open areas outdoors, but can also be used indoors

The different types of Flame detector are:

They are light scattering photometers (i.e, nephelometers) incorporating a pulse, high output, near-infrared light emitting diode source, a silicon detector/hybrid preampliifer, and collimating optics and a source reference feedback PIN silicon detector. The intensity of the light scattered over the forward angle of 50° to 90° by airborne particles passing throught the sensing chamber is linearly proportional to their concentration. This optical configuration produces optimal response to particles in the size range of 0.1 to 10.0 µm, achieving high correlation with standard gravimetric measurements of the respirable and thoracic fractions.