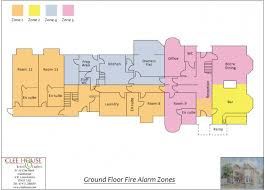 Zonning of different devices are shown below:

Each input is represented by a physical ‘zone’, which consists of wiring the circuit to one or more devices that serve a part or a whole area.

The alarm start zones are electrical circuits connected to field devices such as smoke or heat detectors, manual stations or sprinkler alarm switches. The activation of any device connected to this type of zone will cause audible signals to sound in accordance with the approved signalling sequence.

The supervisory start zones are electrical circuits connected to devices such as sprinkler valve monitoring switches or low pressure sprinkler sensors. The activation of a device connected to a supervisory start zone will obviously not cause the warning or alarm signals of the building to sound, but will initiate a condition of monitoring problem of the system in the Control Unit.

The Building Code requires a separate zone for:

Any room or area, separated by a fire-resistant two-hour fire separation, other than housing units also requires a separate area. As fire separations are a primary tool for fire containment, it is logical that this area is also identified separately.

Smoke detectors, which are required in an air handling system, also require a separate zone for reasons similar to the axes.

If the fire alarm system uses sprinklers as heat detection devices, all of the following items are required to be provided with a single zone announcement in the fire alarm control unit, and must indicate a supervision/problem signal in the building: