Elastic diaphragm gauge is a pressure measurement device, which works under the principle When an elastic transducer (diaphragm) is subjected to a pressure, it deviates. This deviation is proportional to the pressure applied when calibrating.

The main parts of the diaphragm, which is a thin circular plate (made of elastic metal), are firmly fixed around its edges. The diaphragm can be flat or corrugated. 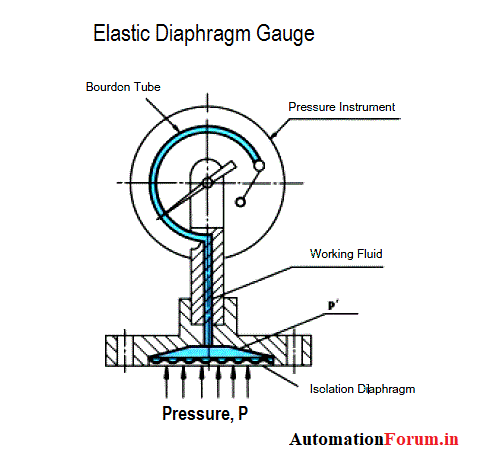 The upper part of the diaphragm is fixed with a protrusion of negligible weight. This projection is in turn connected to a link - sector - pinion arrangement in the case of a diaphragm indicator that uses mechanical means for the extension of the displacement.

That is, the linear displacement of the diaphragm becomes a magnified rotational movement of the pinion. When the pinion rotates, it causes the pointer to adhere to it to assume a new position on the calibrated pressure scale that becomes a measure of the applied pressure.

In the case of the arrangement with the parallel plate capacitor, the movable plate moves upwards, thus reducing the space between the plates. This causes the capacitance of the capacitor to become a measure of the applied pressure.