There are two methods in drilling:

Once the site has been selected, it must be inspected to determine its limits, and environmental impact studies may be required. Lease contracts, titles and access points for the land must be obtained and legally evaluated. For offshore sites, the legal jurisdiction must be determined. Once the legal problems have been resolved, the crew prepares to prepare the land; Preparation is essential and involves the following steps:

The anatomy of a drilling rig, although simple in a schematic representation is, in reality, quite complex and consists of the following systems: 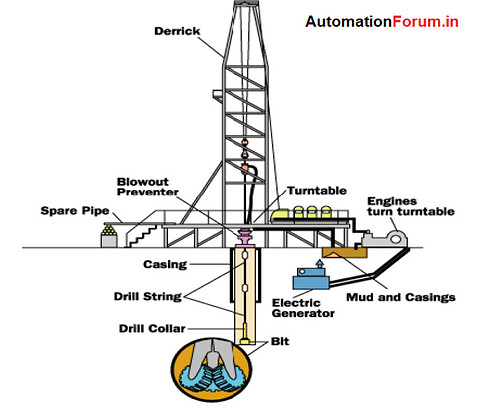 Mechanical system that is driven by electric motors:

which is a large-diameter concrete pipe that lines the drill hole, prevents the hole from collapsing, and allows drilling mud to circulate.

pumps drilling mud (mixture of water, clay, weighting material and chemicals, used to lift rock cuttings from the drill bit to the surface) under pressure through the kelly, rotary table, drill pipes and drill collars:

High-pressure valves (located under the land rig or on the seafloor) that seal the high-pressure drill lines and relieve pressure, when necessary, to prevent a blowout (uncontrolled gush of gas or oil to the surface, often associated with fire).

Drilling an oil well is tedious and is often accompanied by difficulties. Some problems result from formation penetration and the occurrence of high-pressure gas, fissures, or unexpected high pressures in permeable rock.

Once the rig is set up, drilling operations commence. First, from the starter hole, a surface hole is drilled to a preset depth, which is somewhere above the location of the oil trap. There are five basic steps to drilling the surface hole:

When the preset depth is reached, the casing pipe sections are run into the hole and cemented to prevent the hole from collapsing. The casing pipe has spacers around the outside to keep it centered in the hole. The cement is pumped down the casing pipe using a bottom plug, a cement slurry, a top plug, and drilling mud.

The pressure from the drilling mud causes the cement slurry to move through the casing and fill the space between the outside of the casing and the hole. Finally, the cement is allowed to harden and is then tested for such properties as hardness, alignment, and a proper seal.