What is a servo system?

The servo system is a feedback system that can continuously adjust the power to the servo device such as a servo motor. With the feedback signal the servo system adjusts the motor speed to the desired level, thus precise speed control can be achieved.

The servo drives where installed in air-conditioned, centralized drive cabinets, often requiring long power runs and feedback cables out to the motors themselves. Demanding for the more flexible drive that commonly controls more than one motor.

The distributed servo drive is used to control different servo motors in the industry, which gives more flexibility to the system.

The centralized, distributed and assembled distributed servo architecture units of unified motor units offer many of the same functional, security and network capabilities. The choice between them is dictated by a number of factors, including the power requirements, the space available in the cabinet, the complexity of the application and the modularity requirements of the production line. 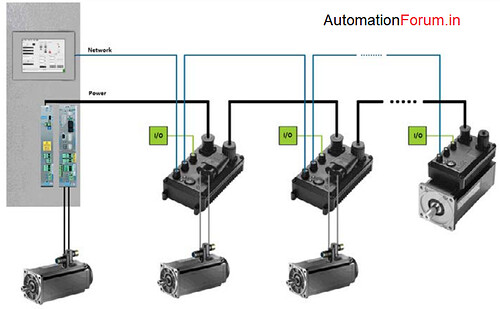 The above figure shows the centralized, distributed control configurations of the servo motor connection. The motor at the left end is in centralized connection, the cables to the servo drives, power supplies and supervisory controller located in a centralized cabinet.

The distributed connection provided for the two motors at the middle. For the distributed system, the servo drive is moved near to the motor. Both the motors are connected in a network, Another decentralized configuration is the integrated, or unitized, servo drives motor combination, in which the drive is mounted directly on the servo motor, which is shown with the fourth motor in the figure. This eliminates the need for the machine builder to install cables between the two. This can also eliminate the need for a special feedback encoder.

What is servo mechanism and where is it used