Displacement can in two types contact and non-contact type. Besides the measurement principles can be classified into two categories: electrical sensing and optical sensing. Below lists the different displacement meters.

where xi is the input displacement, xt is the total displacement and E is the supply voltage.

The linear variable differential transformer (LVDT) is a special transformer which works based on the principle of mutual inductance. The LVDT produces an electrical signal that is proportional to the linear displacement of a movable armature or core so that it can be used as a transducer for measuring linear mechanical displacement by measuring its electrical output. 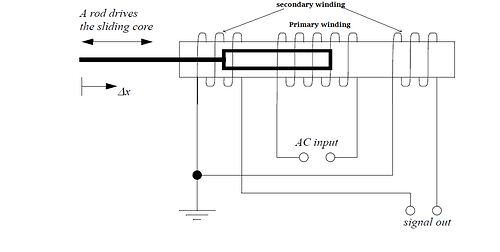 When the primary is energized by an ac supply, voltage is induced in the secondary through the core by transformer action. The position of the core, determines the magnitude of the induced voltage to the two secondary coils having the same number of turns.

If the core is precisely positioned at the center, the two secondary voltages will be equal and of opposite polarity when measured with respect to common terminal C. So the voltage measured between terminals AB will be zero.

The inductive type of sensor works under the principle of self-inductance, which can be also used for proximity detection. 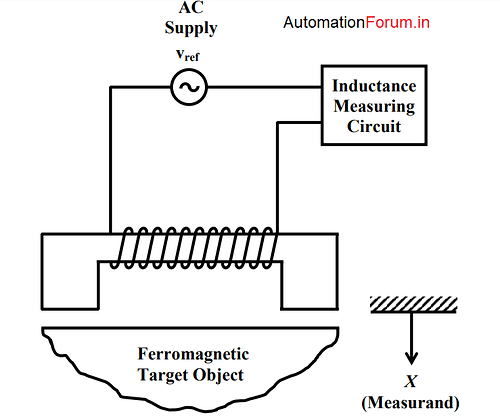 Optical displacement sensors work on the basic principle that the intensity of light decreases with distance.

The optical sensor consists of a light source and a photodetector. Light emits from the light source to the target object and reflects back to the sensor, detected by the photodetector. The intensity of light reflected is proportional to the distance to the object. The light source could be Laser or LED; photodiodes or phototransistors are used for detection.