The measure of purity is done by the principle of the conductivity of water. Specific conductivity mho/cm3 is the conductance of column of mercury 1cm2 cross-sectional area and 1cm long. This is a large unit and micro measurement is used and when corrected to 20°c is called Dionic unit. 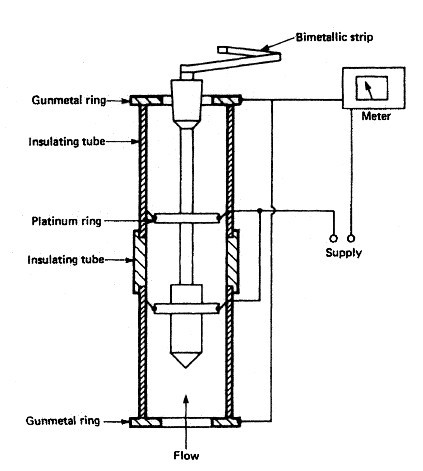 Conductivity of pure distilled water is about 0.5, fresh water about at 500 dionic unit.

The salinity measuring unit ( shown in Figure ) uses two small cells each containing a platinum and a gunmetal electrode. The liquid sample passes through the two cells and any current flow as a result of conductance is measured.

Since conductivity rises with temperature a compensating resistor is incorporated in the measuring circuit.

The sensor measures the conductivity of water coloumn in parallel, that is between positive platinum rings and negative gunmetal collars. The insulating plunger, operated by bimetallic strip, varies cross sectional area for automatic correction to 20°c.

The measurement by conventional ohmeter. The device should be used with de-gassifying units to avoid error due to errors due to occulation of carbon dioxide