A large part of any complex SCADA system design is involved in matching the protocol and communication parameters between connecting devices. There are about 200 such real time user layer and application protocols. These include both proprietary and non- proprietary protocols, some of which are listed below:

IEC 60870-5 is the collection of standards produced by the IEC(International Electrotechnical Commission). It was created to provide an open standard for the transmission of SCADA telemetry control and information. It provides a detailed functional description for telecontrol equipment and systems for controlling geographically widespread processes specifically for SCADA systems. The standard is intended for application in the electrical industries, and has data objects that are specifically intended for such applications. It is also applicable to general SCADA applications in any industry. But IEC 60870-5 protocol is primarily used in the electrical industries of European countries.

When the IEC 60870-5 was initially completed in 1995 with the publication of the IEC 870-5-101 profile, it covered only transmission over relatively low bandwidth bit-serial communication circuits. With the increasingly widespread use of network communications technology, IEC 60870-5 now also provides for communications over networks using the TCP/IP protocol suite. This same sequence of development occurred for DNP3.

The DNP3 or Distributed Network Protocol is a set of communications protocols used between components in process automation systems. It is usually used is in utilities such as water and electric companies. It is also technically possible to use it in other utilities. It was specifically developed to facilitate communications between various types of data acquisition and control systems. It plays a crucial role in SCADA systems. It is used by SCADA Master Stations or Control Centers, Remote Terminal Units, and Intelligent Electronic Devices. It is primarily used for communications between a master station and IEDs or RTU’s. DNP3 supports multiple-slave, peer-to-peer and multiple-master communications. It supports the operational modes of polled and quiescent operation. The latter is also referred to as reporting by exception. 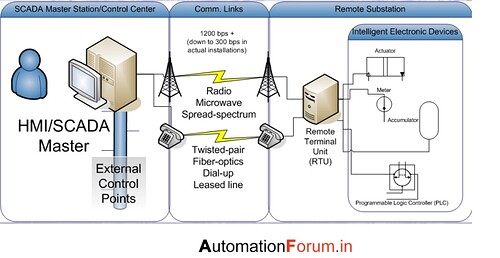 The DNP3 protocol is utilized in communication between various SCADA system components. These system components include the SCADA master or HMI, the Remote Terminal Units, and Intelligent Electronic Devices.Operators of SCADA systems can monitor the DNP3 protocol within their operations to increase system reliability. This will reduce customer roil by decreasing downtime. DNP3 protocol was designed to avoid being distorted by legacy equipment, as well as EMI noise and low-grade transmission channels. While it adds network reliability, the DNP3 protocol does not make provisions for communications security

The point-to-point Modbus protocol has become a virtual standard for RTU and PLC communications. During communication on a Modbus network, the protocol determines how each controller will know device address, recognize a message addressed to it determine the action to be taken and extract any information / data attached to it. There are a number of expansions to fix these shortcomings. Modbus is, in many companies, a de facto standard in spite of its shortcomings. It cannot, for instance, handle large positive and negative numbers. This has resulted in a number of companies specific expansions of the protocol, such as Bristol, Daniels, ENRON and others. The idea behind Modbus, a command set operating on 16 bit registers has been used by all PLC manufacturers in the past

The non-proprietary Modbus X expansion has been adopted by a number of companies and utilities and by SCADA software suppliers. It fixes the Modbus shortcomings, makes it man readable and able to handle positive and negative numbers with up to 9 digits of resolution, with an exponent range from -99 to +99. Point protocol, designed to read and write to individual I/O (Input Output) points in PLCs on a factory floor. The ModbusX expansion of the protocol is a universal, non-proprietary expansion, which permits handling large process variables in plain ASCII with sign and exponent, capabilities that are missing in Modbus. With the universal ModbusX expanded protocol it is no longer necessary to experiment with different proprietary expansions of the protocol.

A member restricted protocol, used in some Electric Power systems. The DNP protocol has gone through various iterations. Presently it is up to version 3.0. The DNP association has rules, which tend to restrict the use of the protocol, and major SCADA software suppliers have been slow in implementing the protocol.

This protocol is mostly used in power transmission and distribution systems IEC 60870-5-101 is an International Communications Protocol Standard for the Telecontrol of Electric Power transmission systems, which is being widely adopted in many countries throughout the world.

What is iiot ? benifits and applications