Infrared detectors convert electromagnetic radiation energy or temperature changes into electrical signals. There are many types of infrared detectors and each detector type offers a wide range of performance characteristics. Some of the types are described briefly below:

A detector that converts temperature into an electrical signal is commonly known as a thermocouple. The junction of dissimilar metals generates a voltage potential, which is directly proportional to the temperature. This junction can be made into multiple junctions to improve sensitivity. Such a configuration is called a thermopile. 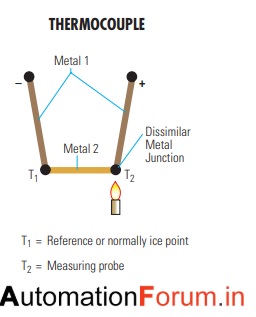 Using techniques used in the semiconductor industry, many junctions are connected in a series to multiply the output of the device, yet the detector package is miniaturized and compact. The size and mass of the device are important in determining its response time and other characteristics of the device. This detector has a relatively slow response time, but offers the advantages of DC stability, requiring no bias, and responding to all wavelengths. It is the simplest way of converting light energy into an electrical signal.

A bolometer changes resistance when incident infrared radiation interacts with the detector. This thermally sensitive semiconductor is made of a sintered metal oxide material. It has a high temperature coefficient of resistance.

Pyroelectric materials are crystals, such as lithium tantalate, which exhibit spontaneous polarization, or a concentrated electric charge that is temperature dependent. As infrared radiation strikes the detector surface, the change in temperature causes a current to flow. This current is proportional to the intensity of the radiation. This detector exhibits good sensitivity and good response to a wide range of wavelengths, and does not require cooling of the detector. It is the most commonly used detector for gas monitors. 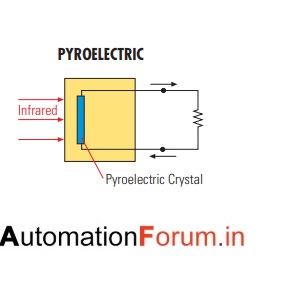 Photons possess energy based on their wavelength and intensity. A photon detector detects the quantum interaction between incident photons and semiconductor material. A photon that strikes an electron with sufficient energy can raise the electron from a nonconducting state into a conducting state. The presence of electrons in the conduction band will increase the conductivity of the chip, and a bias voltage registers this change as a signal. The excitation of electrons requires photons to have a certain amount of energy. Shorter wavelengths have higher frequencies, and therefore more energy. This detector functions in a limited spectral region, which depends on the detector material being used. Typically, the detector must be cooled with a thermoelectric cooler or even liquid nitrogen for it to function properly. A typical example of such detectors are lead sulfide (PbS) detectors used in the 1-3 micron region, and lead selenide (PbSe) detectors used in the 1-5 micron region. 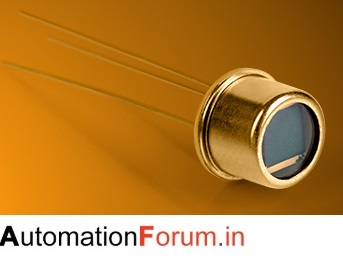 The word “luft” is a German word meaning “air,” and the original luft detectors were designed in Germany. A luft detector consists of two chambers, either linked by a micro flow sensor or divided by a diaphragm. The chambers are sealed with a target gas at a low pressure. IR transparent windows are fitted to seal the chambers and the same intensity of pulsed infrared radiation is received by both chambers when no target gas is present. 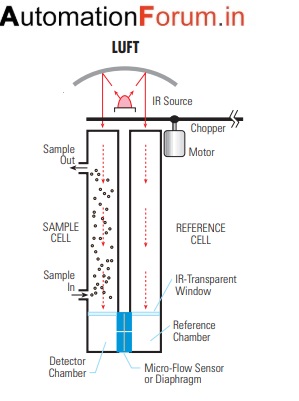 When the sample containing target gas flows through the sample cell, a reduction in radiation energy is received by the detector chamber, which causes the temperature and pressure to drop in the detector chamber. The amount of temperature or pressure drop is in direct proportion to the gas concentration. In the case of linked chambers, the pressure difference between the two chambers causes a detectable flow, which is measured as a signal. In the case where a diaphragm separates the two chambers, a movement of the diaphragm causes a measurable change in capacitance. This detector finds many useful applications as an analyzer, and has good potential for further development.

This detector is similar to the luft detector except that the pressure change is measured by a condenser microphone. The sample gas is passed through a chamber at a preset time interval and the chamber is sealed with a fixed volume of sample gas trapped inside. A specific wavelength of infrared radiation is pulsed into the chamber via an infrared transparent window. The pulsating pressure change is measured by the microphone as a frequency change which produces the signal. 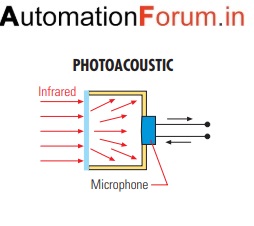