The 422 and 485 standards offer robust solutions for transmitting data over long distances and noisy environments. Both the 422 and 485 are similar to the RS232. 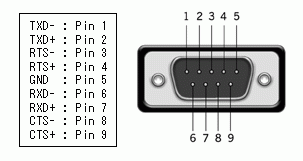 The 422 and 485 standards offer robust solutions for transmitting data over long distances and noisy environments.

The TIA/EIA-422 standard, known as RS422, describes a communication interface over multiple pairs of wires to establish communication from one transmitter to up to 10 receivers.

When data from a slave is requested, it turns on its line driver, transmits data and turns it off again to allow transmission from another slave.

The TIA/EIA-485 standard, known as RS485, describes a communication interface over one or two pairs of wires to establish communication between 32 “load units”. Usually, each network device (transmitter and receiver) corresponds to one “unit load”, thus resulting in a 32 devices network.

RS-485 is generally a 2-wire system, although some manufacturers may specify 4-wire RS-485, which is much less common and very similar to the RS-422. It is important that you identify which one is being used when considering an instrument.

RS485 networks usually communicate using a twisted-pair of wires, where data flows in both directions.

Each device turns on its line driver only when transmitting data, and keeps it off (in high impedance state) for the remaining time to allow other devices to transmit.

RS485 networks can also operate using 2 pairs of wires, in full-duplex mode, as described for RS422.

Transmitters and receivers may get damaged if high voltage is applied from any of the wires to a common reference (ground). TIA/EIA-485 specifies this maximum common-mode voltage from –7 V to +12 V.

While TIA/EIA-422 specifies limits from –7 V to +7 V. Voltage above these limits are usual when only the communication pair connects multiple isolated devices.