Why starter is needed?

The current drawn by a motor is limited by its reverse thrust force, since this EMF is opposed to the supply voltage and, therefore, the resulting voltage is responsible for the current. This return e.m.f. It is proportional to the speed. Therefore, when the motor must be started, initially the acceleration is zero and therefore the buttress is zero and therefore at the beginning the current is limited only by the resistance of the armature which is generally in terms of friction of an ohm and the current

Hence the device needed only less EMF at the initial stage of operation, which is achieved by using a resistance series with the motor at the beginning and resistance will be cut off from the circuit while the motor achieves actual speed.

The starter has two additional features, the no-volt coil and overload release coil to protect the motor from damage when operating under abnormal conditions. Out of the various starters available, the three-point starter is more commonly used and is discussed next.

The starter consists of a number of resistances connected between studs. The arm of the starter makes contact with these studs and also to two metal arcs. These arcs are connected to the no-volt coil and the overload release to the starter arm. 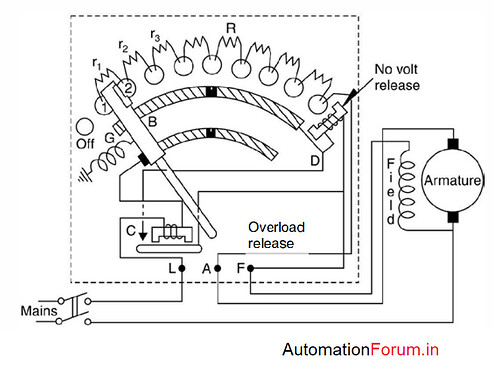 The starter has two important features the no-volt release and over load release. Suppose the motor is running under normal condition and suddenly the supply fails. If the starter arm remains in the extreme right condition when no external resistance is inserted in the armature circuit and in the mean time the supply is restored, the armature of the motor will get damaged