What are the common symbols used in Piping and Instrumentation Diagram (P&ID)?

Piping and Instrumentation Diagram are also known as P&ID, it shows the diagram of the piping and related components of a physical flow. It is mainly used in the engineering field.

What is the purpose of P&ID?

P&IDs are essential for the maintenance and adjustment of the process that they graphically represent. The diagram also serves as the foundation for the construction of system control systems, such as the Hazard and Operability Study, during the design stage.

Depending on the type of valve required for the application, the control valve symbols on a P&ID vary. Each P&ID has its own narrative that identifies the various equipment symbols. 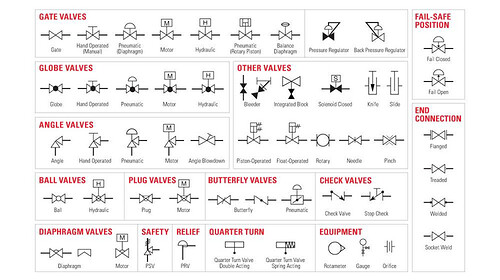 A valve’s ports are the locations on the valve body where the flow enters or exits the valve. Relief valves have two ports: an intake and an outlet. The entrance is frequently referred to as port 1, and the outflow is port 2.

The valve body is represented by the dashed manifold line. It is not always included in a relief valve schematic symbol since many relief valves are cartridge valves with no separate manifold.

This arrow denotes the relief valve poppet, which permits the valve to break open when the pressure on the inflow port becomes too high.

The valve is generally open when an arrow is in line with the intake and exhaust ports. 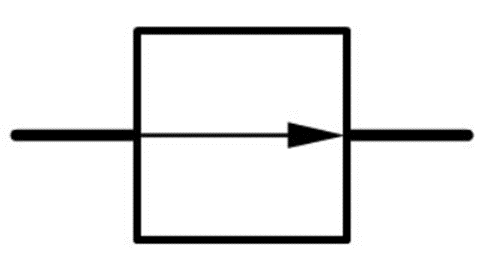 The valve is generally closed if an arrow is not in line with the intake and exhaust ports.

The valve pilot line is represented by the dashed line. The input port and pilot route are the same in this type of relief valve. This is not always the case with more sophisticated valves.

The changeable spring setting is shown by the angled arrow across the spring. The relief valve in this example features an adjustable knob that compresses the spring, raising the relief setting.

Each square part of a directional control valve schematic representation, known as an envelope, shows a possible location for the valve spool. When the valve is in that position, the arrangement of symbols and arrows inside each envelope informs you how the ports are connected.

Let’s take a look at each of the three places of this valve, both schematically and graphically.

In our illustrations, red denotes a pressurised tube and blue denotes a return/tank passage.

All of the valves depicted are two-way, two-position directional valves. This means that they have two flow pipe connections and can switch between two orientations.

The top symbol depicts a manually operated valve being pressed against a spring. The double arrow in the left box indicates that the flow can go both ways. Valves should always be drawn in the de-activated state, i.e., pushed over by the spring rather than the solenoid. As a result, this top valve is a ‘Normally Closed’ (NC) valve, which means that when it is in standby mode, the right-hand box is connected to the pipes and no flow may pass through (closed). When the left-hand box is triggered, it connects to the pipes and allows flow through the valve.

The bottom symbol depicts a hydraulically powered valve; however, flow can only pass one way because the spring chamber is connected to the low pressure, return line connection. When employing valves that switch pressure lines without a direct, low-pressure return line connection, ensure that the solenoid and spring chambers of the valves are rated for the greatest pressure they may see. Without a low-pressure drain signal, not all valves will operate or work safely.

All of the valves depicted are three-way valves. This indicates that they have three flow pipe connections.

The top symbol depicts a two-position valve controlled by a mechanical roller. As an example, as the cylinder extends, it contacts the roller, which switches the valve and causes the cylinder to cease moving. 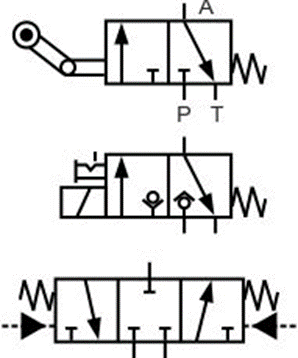 The middle valve has two positions as well, however it is controlled by a solenoid and features a detented hand emergency button. The ball on seat symbols inside the valve further show that it is a low leakage poppet style valve as opposed to a standard spool design valve.

A manual lever controls the top valve, which has a spring return. 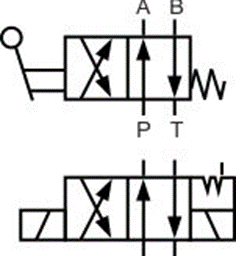 The bottom valve is solenoid-operated and has two detent locations to keep the valve in the last switched position.

All of the symbols depict four-way three-position valves. They are all displayed in their central standby locations. Take note of how the valves all have two springs, allowing the valve to sit in its centre, standby position in the absence of a signal. 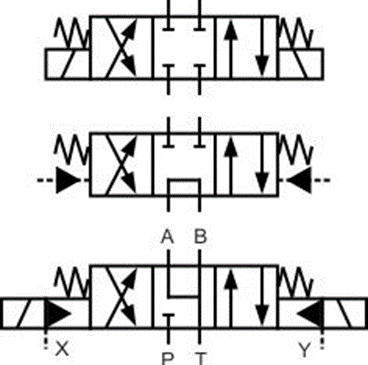 When the electrical solenoids are activated, the spool position shifts to the right or left, allowing the different symbol logic to be used.

The top illustration depicts a direct operated (one-stage) directional valve with all ports closed in the centre position. Because this is a spool valve, there will be some leakage between ports, thus the A and B lines may still experience varying pressures, encouraging cylinder creep.

A hydraulically actuated valve with an open P to T line is depicted in the middle symbol. This format is widely used with fixed displacement pumps to ensure that no pressure is applied to the pump when it is not needed.

A two-stage electrically actuated valve is depicted in the bottom symbol. To avoid pressure buildup on the actuator, the A, B, and T lines are connected together in the centre position. This valve also has a remote pilot feed to the solenoids at X, which might be a stable 100bar. And an external pilot drain at Y, so that changes in line pressure are not felt by the solenoids.