Step open and step closed test are used to determine the stroke time of the valve and which components restrict the valve’s movement.

If the air pressure upstream of the positioner drops significantly, this would be an indication that upstream supply components, such as pipes, pipes or a regulator, were creating some kind of restriction. These are known as “Step” tests, instead of “quick-open” or “quick-close” tests, to distinguish them from the safety function that some valves must perform. 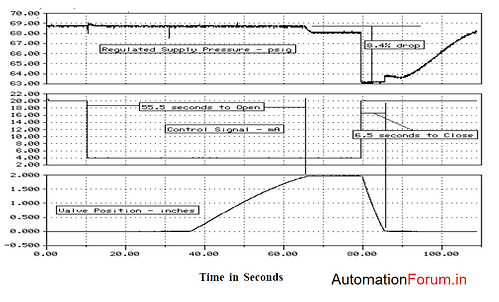 Looking at each parameter versus time during the Step Open and Step Closed Test indicates if the supply or regulated air pressure is being restricted, or if the positioner, SOV, or volume booster could be a problem with slow valve response.

This plot might also reveal mechanical problems such as a plug sticking in its seat, or jerky stem movement. Whatever the problem is with regard to slow valve response, this plot can either eliminate components, point to a component, or indicate that a component needs further investigation.

In this air-to-close valve, the time to open, as measured from the time the control signal started to decrease, was 55.5 seconds. As can be seen further along on the figure, it took 6.5 seconds to close. It can also be observed that the supply pressure dropped only about 5 pounds during the highest demand period. 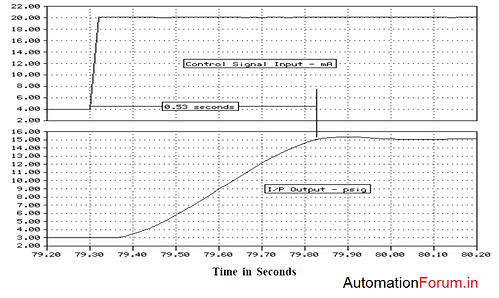 The response rate of an I/P transducer (how fast the output pressure responds to a step change in the input signal) can also be evaluated during the Step Open and Step Closed Test. When compared to a properly operating I/P, a slow responding increasing pressure output might indicate a problem in the I/P or might indicate a leaking airline. The figure shows the response to increasing input signals. 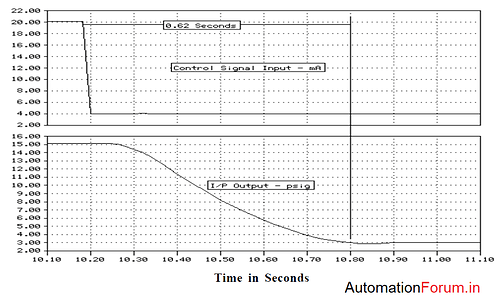 This figure shows the response to decreasing input signals. The overall response time for the I/P to reach the 3 psig output signal is 0.62 seconds from the time the input signal first starts to decrease