What is a Generator

Generator is a device which is used for converting mechanical energy into an electrical energy its working is based on Faraday’s law of electromagnetic induction, e.m.f is produced according to Faraday’s law, the law states that whenever a conductor is placed in a varying magnetic field an e.m.f will be induced in the conductor, and the e.m.f will cause a current flow to the conductor which will take place if the circuit is closed

There are two types of generator which are AC and DC generator a generator always converts mechanical power into electrical power. In an AC generator, it produces alternating current while in DC it produces direct current 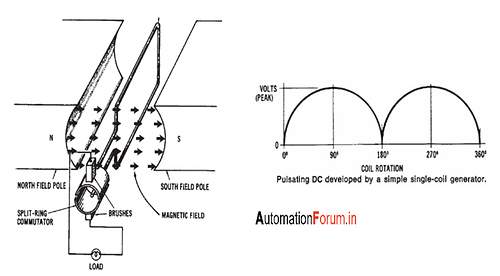 It is the rotating device in the generator it consists of a single loop of wire made to rotate in a magnetic field. Mostly the rotor consists of several coils of wire wound on an armature

The armature is a cylinder which is made up of laminated iron and it is mounted on the axle, the axle is mounted in the external part of the generator. To make the rotor spin torque is applied to the axle.

It is the fixed part of the generator that supplies the magnetic field in which the coil rotates and it may consist of two permanent magnets with opposite poles which are shaped to fit around the rotor, the magnetic field may be provided by two electromagnets alternatively

The brushes will maintain contact with the coil by the help of slip rings or the split ring commutator. And the electric current will be conducted from the coil to an external circuit

The electromagnet has many turns of a copper wire coil wound on a soft iron core, the electromagnets are mounted in a way that the opposite poles face each other and wrap around the rotor 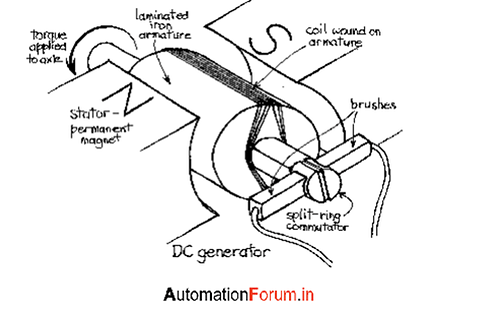 Why does a DC generator is replaced by an AC generator

Types of Excitation system and how is it useful for power system
Types of DC generator ? the purpose of a commutator in a DC generator
Components of AC generator and AC generator types
Saran_S July 3, 2019, 6:17am #2