Components of a petroleum production system

The reservoir is the source of the underground fluid for the production of petroleum products. The reservoir consists of one or several interconnected geological fl.ow units. While the shape of the well and converging flow have created in the past the notion of radial flow configuration.

There are different types of reservoir classified based on the variation in the bubble point.

Bubble point: A specific point is the critical point, where the properties of liquid and gas converge. For each temperature less than the critical-point temperature there exists a pressure called the “bubble-point” pressure, above which only liquid (oil) is present and below which gas and liquid coexist.

If the reservoirs above the bubble-point pressure are called “undersaturated.”

For temperatures larger than the critical point, Outside, the fluid is gas, and reservoirs with these conditions are “lean” gas reservoirs.

The maximum temperature of a two-phase envelope is known as “cricondentherm”. Between these two points there is a region where, due to the shape of the gas saturation curves, as the pressure decreases, liquid or “condensate” is formed. This occurs up to a limit value of the pressure, after which the further reduction of pressure results in vaporization. The region in which this phenomenon occurs is known as the “retrograde condensation” region, and deposits with this type of behaviour are known as “reservoirs of retrograde condensates”.

The entrance of fluids into the well, following their flow through the porous medium, the near-well zone, and the completion assembly, requires that they are lifted through the well up to the surface.

If the bottom hole pressure is sufficient to lift the fluids to the top, then the well is under “natural lift”, otherwise one should use the artificial lift. The mechanical lift can be supplied by a pump.

Another technique is to reduce the density of the fluid in the well and thus to reduce the hydrostatic pressure. This is accomplished by the injection of lean gas in a designated spot along the well. This is known as “gas lift.”

The Zone near the Well:

The zone surrounding the well is important, the well has to be rigged and well constructed to provide support the casing. But at formation depths the most important reason is to provid zonal isolation.

The various well completions and the resulting near-wellbore zones are shown: 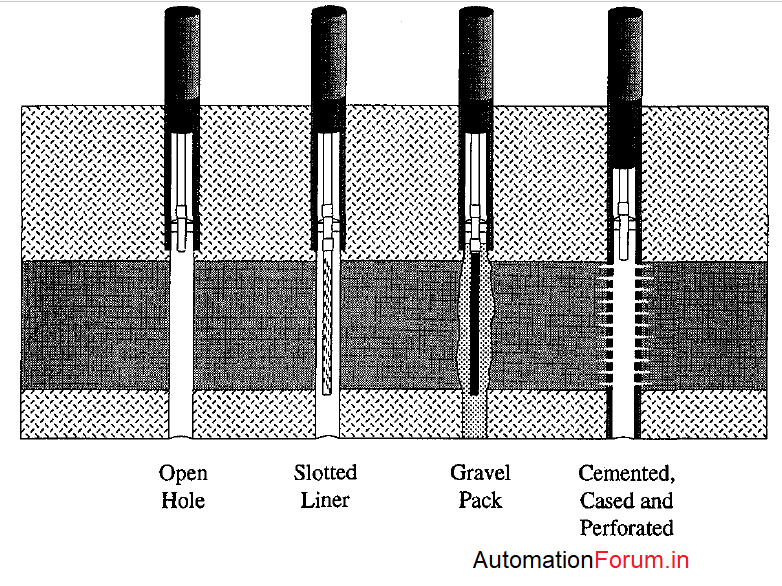 The ability to direct the drilling of a well allows the creation of highly deviated and horizontal wells. In both cases, a greater exposure of the well to the deposit is achieved than in the case of vertical wells.

After the fluid reaches the top, it is likely to be directed toward a manifold connecting a number of wells. The reservoir fluid consists of oil, gas (even if the flowing bottomhole pressure is larger than the bubble-point pressure, gas is likely to come out of solution along the well), and water.

Traditionally, the oil, gas, and water are not transported long distances as a mixed stream but instead are separated at a surface processing facility located in close proximity to the wells.

The modern technique is to collect the oil and gas from different wells and transported all along to a distant production unit. The flow systems from the reservoir to the entrance to the separation facility are the production engineering systems