CHANGES MADE BY THE TRANSDUCER IN OUR TECHNOLOGY

A transducer is an electrical device which converts one form of energy to another. Transducer deals with different types of energies such as mechanical, light energy, chemical, thermal, acoustic, and electromagnetic energy. A transducer converts a signal in one form of energy into a signal in another. Transducers are used in automation, measurement, and control systems the process of converting one form of energy into another form is known as transduction the best example of a transducer is a mic which we use in our mobile phones that converts sound into electrical signals and then amplified it into preferred range. Then alters the electric signals into audio signals at the output of the loudspeaker.

It is used to detect the stick drum impact in electronic drum pads. And also used in muscle movement checking which is known as acceleromyography it can also be used as a knock sensor in automotive engine management systems for noticing knock of the engine.

This transducer alters the pressure forced into electrical signals.it is also called as manometers, indicators, piezometers, transmitters and pressure sensors.

It is used to measure pressure of the specific quantities like gas or liquids by changing the pressure into electrical energy its main application is amplitude sensing depth sensing, flow sensing, and leak testing these transducers can be used for generating electric power under the speed breakers on the highways of the roads where the force of the vehicle can be converted into electrical energy.

This transducer will convert electrical signals to ultrasound waves. It can also be used to measure the distance of the sound based on reflection. By the help of this transducer, we can find areas which are hard to find like high pressure or high-temperature areas

if any obstacle or any object is found that is detected by ultrasonic transducer, then it will reflect back from the object and transducer will receive these waves the time used by the transducer for transmitting and receiving the waves can be noted by considering the velocity of the sound then based on the sound velocity and by the help of microcontroller the distance is measured and will be displayed on the LCD display 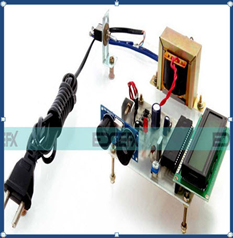