What is a CRO?

Cathode ray oscilloscope CRO is used as a visual aid to analyse the signals of electronic circuitry. The amplitude of the wave is plotted against time in the X-Y axis respectively. CRO consists of Cathode ray tube that has is the display part which is used in applications such as electrical, medical, automotive and industrial applications. CROs can be used to analyse frequency, amplitude, time period and other parameters associated with the signal.

Some oscilloscope have the provision to store a brief signal for displaying it fro a certain period of time, such oscilloscopes are called storage oscilloscope. Modern day oscilloscope consists of LCD displays and ability to convert analog to digital data fast with digital processors. Without the integrated display unit they are called digitizers which are used in portable application 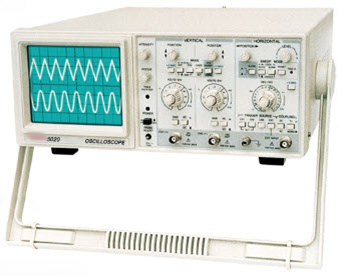 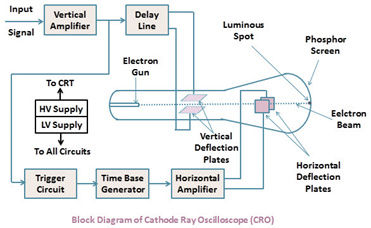 CRO is a basic oscilloscope with a display, vertical ad horizontal controls and trigger controls in addition to probes. A CRT (Cathode ray tube) is the display unit with graduations in the X and Y plane called graticule. To contro, tehe display properties of the CRT, focus, intensity and beam finder controls are found on the CRO.

Amplitude of the displayed signal is controlled by the vertical section where controlling the volts per division to be displayed on the screen is possible by a selector knob. In addition selection of AC/DC and ground is possible with a vertical beam adjustment knob.

Controlling the time period of the display or the sweep of the instrument where allocating the seconds per division in the horizontal axis is doe in the horizontal section of the controls with selector switches. There is also provision for plotting in dual axis in this section.

The start of the sweep orthe display is controlled by the trigger section which can automatically restart after each sweep and can also restart on a input from the other events. Trigger is used to select the source of the signal to be displayed.

A probe can be used to display waveforms on any part of the circuit. With high input resistance so that they do not draw current from the system under analysis, they have high attenuation factor to remove the load of the probe on the analysed circuit.

CRT is the cathode ray tube that is used as the display section of the basic CRO. Though they have been changed to digital displays. CROs are still used in many laboratory applications.

Components of the CRT: 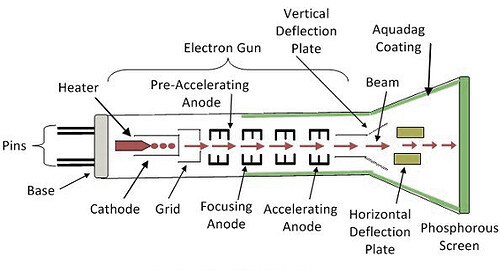 Heater: Used to raise the temperature of the cathode Cathode: Emits electrons on heating, it is cylindrical in shape that can emit electrons even at moderate temperatures. It is coated with Barium and strontium oxide

Grid: Electrons from the cathode pass through the Grid made of Nickle cylinders with a hole at the center. The cylinders are coaxially placed with the tube. On giving a negative potential to the grid, the number of electron emitted from the cathode can be controlled which controls the intensity of the waveform on the screen.

Pre accelerating and Accelerating anode: these are positively charged electrodes to increase the speed of the electrons . For low frequency ranges these anodes are not needed.

Focussing anode: This anode is used to focus the electron beam on the screen through electrostatic focussing which is possible by using two concave lenses.

**Vertical deflecting plates :**These plates are used to deflect the electron beam in a vertical direction. The waveform to be analysed is connected across these plates. There is an upper frequency limit to the CRO which is given by

Where Vox is the velocity of the electron beam in the x direction before it enters in the deflecting plates. Ld is the length of vertical deflection plate

Screen of the CRT

The screen is coated with phosphor and made of optical fiber. Phosphor has the property of luminescence called the fluorescence which is the element glows for a certain amount of time when hit with electrons due to the production of photons when the excited electron move down from the excited state after being hit by the incoming electron beam.

To increase the luminescence of the phosphor, traces if other elements are added thus increasing the e luminous efficiency, spectral emissions and the time of the luminescence.

These additives are called activators and Silver, Manganese, Copper and Chromium are generally used.

On the non viewing side of the CRT screen a thin film of metal like Al us deposited which works as the heat sink and to minimise the light scatter from the phosphor by reflecting them back.

From the block diagram of the CRO, we can see that there are two types of amplifiers used in CROs.

Sensitivity is expressed in Volt/cm at mid band frequency.

The product of gain bandwidth is constant so wen gain increases, the band width will decrease…

Horizontal Amplifier : This amplifies the sweep of the generator under normal mode. When the oscilloscope works in X-Y mode where in different parameters are measured as X and Y, it s used to amplify the signal at Y.

In this type of CRO, horizontal plates are always connected to output of the sweep generator and the vertical deflecting plates are connected to two input channels alternatively at a high switching rate. So single electron beam gives traces of two separate waveform connected at the input channel

Peak to peak voltage is measured. Having selected the deflection factor in the vertical controls of volts/division, measurement of voltage is pretty straight forward.

CRO is a voltage-controlled device so direct measurement of current is not possible but by measuring the voltage across a standard resistance can give the current measurement.

The phase difference between two signals can be measured by connecting them across the vertical and horizontal deflecting plates. The pattern formed on the screen is called Lissajous pattern.

When two signals with frequency of one of the signal known, the frequency of the second signal can be found using the Lissajous pattern when they are connected to X and Y plates. 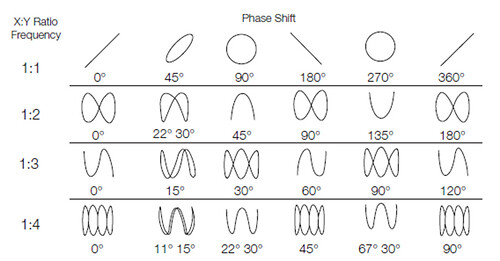 Calculation of frequency from Lissajous pattern: 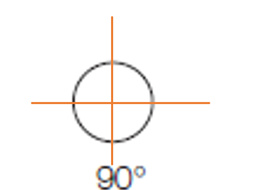 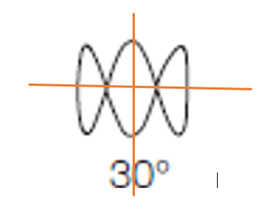