What is carbon dioxide analyzer?

The carbon dioxide analyzer is also referred to as CO2 analyzer, which is often used to detect and measure the amount of carbon dioxide in a sample of gas. These analyzers can be panel mounted using an adapter plate. 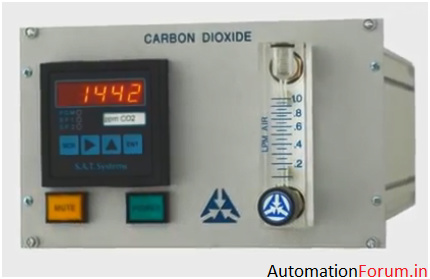 The device will use high energy heated element to generate broadband IR light. This light is passed through a rotating gas filter wheel that causes the beam to alternately pass through a gas cell filled with a mixture of gases. The alteration occurs at a rate of 30 cycles/ sec and causes the beam to be modulated into the reference and measure pulses.

Finally, the beam strikes the detector which is a thermo-electrically cooled solid-state photoconductor. This detector along with its pre-amplifier and bias voltage supply converts the light signal into a modulated voltage signal. The detector output is demodulated to generate two voltages CO2 measure and CO2 reference. These voltages are proportional to the light intensity striking the detector during the measured pulse and reference pulse resp. 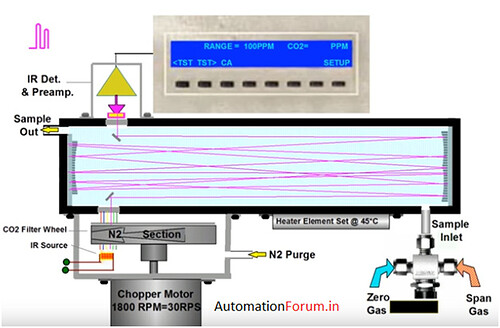 GFC7000 is an example. The typical sensor will look like the above image. This is mainly the science of spectroscopy. The technology of spectroscopy relies on the fact that the molecules will absorb light or electromagnetic energy at specific spectral regions depending on what the molecule is. For example, the absorption of IF radiation takes place at the wavelength near 4.2 microns.