Gas analyzers, they are devices where the output signal from the detector for the gas mixture under test is compared with that for mixtures of the bulk gas containing known concentrations of the determined.

As the standard gas mixture is analogous, it is chemistry that the solution is to be standard. As in solution chemistry, the calibration gas mixtures should reflect, as closely as possible, the composition of the samples they are desired to measure.

Gas mixtures may be prepared by either static or dynamic methods.

In the static method, known quantities of the constituent gasses are admitted into an appropriate vessel and allowed to mix. Static gas mixtures can either be prepared gravimetrically or by pressure measurement.

Mixing streams of two or more components, each of which flows at a known rate, can prepare gas mixtures of known concentration.

The concentration of one gas in the other may vary by adjusting the relative flow rates, but the available concentration range is limited by the flow range that can be measured with sufficient accuracy. Electronic mass-flow controllers are a convenient method of flow measurement and control.

Standard gas mixtures can be prepared by allowing interesting compounds or compounds to spread through a narrow orifice or to permeate through a membrane into a base gas stream that flows at a controlled and known rate over the calibration source. 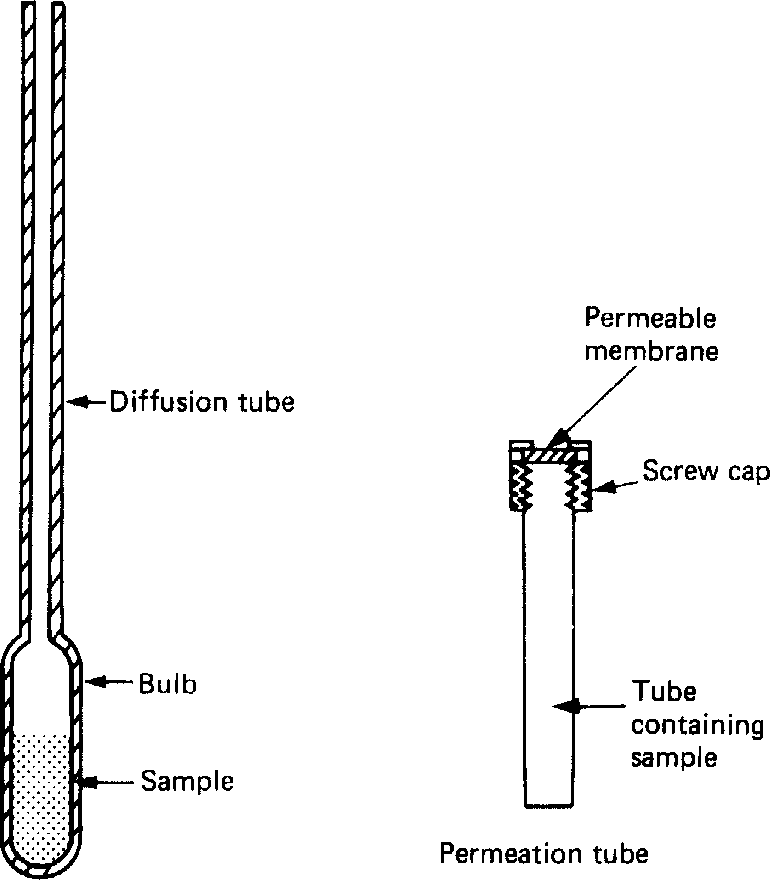 In both cases, there is a sample reservoir, either a volatile liquid or a liquefied gas under pressure, to provide substantially constant pressure, vapour pressure of saturation, upstream of the diffusion tube or permeation membrane.

After an initial induction period, it is found that the permeation or diffusion rate is constant as long as there is liquid in the reservoir, as long as the tube is kept at constant temperature. The tube can then be gravimetrically calibrated to determine the sample’s diffusion or permeation rate.

A volume of gas contained in a vessel in which there is perfect and instantaneous mixing is diluted in the exponential dilution technique by passing through the vessel a stream of a second gas at a constant flow rate.

The exponential dilution vessel is typically a 250–500 ml spherical or cylindrical glass vessel equipped with inlet and outlet tubes, as well as a septum cap or gas sampling valve to introduce the diluted gas. To ensure that mixing is as fast and homogeneous as possible, the vessel must be equipped with a stirrer, usually magnetically driven, and baffles.