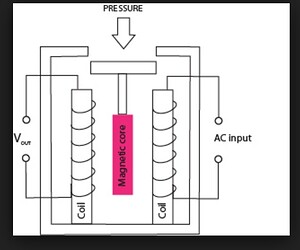 Reluctive Pressure Transducer668×571 36.3 KB
A pressure sensor cam change the spacing between two coils by moving one part of the magnetic circuit. This motion changes the reluctance between the coils,in turn changing the voltage induced by one coil in the other.The change in induced voltage then can be interpreted as a change in pressure.

The LVDT often is used to convert a pneumatic signal to a proportional electrical signal.