Basic parts of a DC motor

What is a DC motor?

Working of a DC Motor 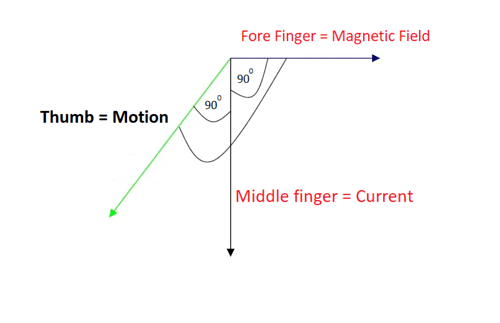 The interaction of the current-carrying conductor with the changing magnetic field produced by the field winding results in the generation of an EMF in the conductor. This EMF operates in the inverse direction of the applied voltage. Back EMF refers to the induced EMF in the motor.

A DC motor, on the other hand, will experience a drop in speed if it is rapidly loaded. As the speed lowers, so does the back EMF, allowing for a higher armature current. Torque will increase to meet the load requirement as armature current increases.

Parts of the DC Motor

The parts of the DC motor are listed below: 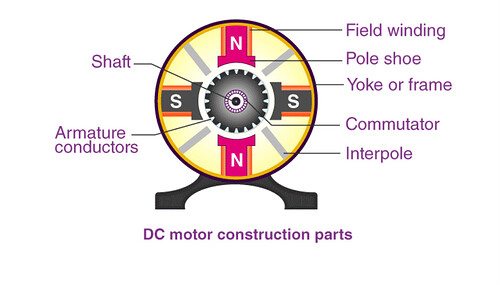 Brushes serve as a bridge between the supply circuit and the rotor by being attached to the commutator. Brushes are often constructed of carbon or graphite.

The term “stationary” refers to the electrical stationary portions of a dc motor. When a voltage is delivered to the stator, it creates a magnetic field around the rotor, causing it to rotate.

The stator is made of:

The rotor is derived from the word “rotate,” and refers to the electrically rotating component of a dc motor. A dc motor’s rotor is one of its moving elements. When a voltage is applied to the armature winding, it moves dynamically. This will generate mechanical motion for a dc motor.

This is one of the most crucial components of a dc motor. The rotor is made of:

The magnetic frame or yoke of a direct current motor is built of cast iron or steel and is an essential part of the stator or static part of the motor.

Its primary duty is to safeguard the sophisticated inner workings of the motor and to support the armature. It also aids the field system by containing the DC motor’s magnetic poles and field winding.

DC motors have magnetic poles that fit into the inside wall of the Yoke and are tightened with screws. Poles are made up of two components: the Pole Core and the Pole Shoe. These two pieces are connected to the Yoke and are held together by hydraulic pressure. Based on its design, each part of the Poles has a specific duty. The Pole Shoe is meant to carry slots for the field windings as well as distribute the flux formed by the field windings into the air gap between the rotor and stator, and it is held above the Yoke by the core. It assists in reducing the loss caused by reluctance.

Armature winding is another DC motor component. The armature winding of a DC motor is made up of two types: lap winding and wave winding. The number of parallel pathways distinguishes them. Armature Winding is coupled to the rotor and adjusts the magnetic field along its rotational path. Magnetic losses are the result of this technique. Designers attempt to reduce magnetic losses by laminating the armature core with low-hysteresis silicon steel. The laminated steel sheets will next be stacked together to form the cylindrical construction of the armature core. The same material is used to create slots inside the armature core.

The coils on the armature are terminated and interconnected by the commutator, which is made up of a number of insulated bars or commutator segments. The commutator rotates with the rotor and serves to rectify the A.C. induced voltage and current in the armature.

DC series motors are appropriate for high and low-power drives and they can be used for both fixed and variable-speed electric drives. It is also simple to design and maintain.

DC Motors can be used in the automobile industry due to its simple design, such as